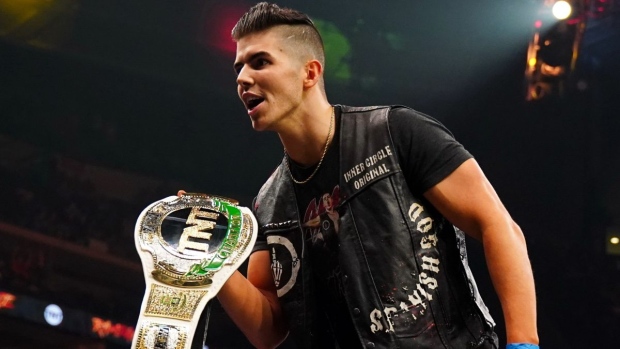 Sammy Guevara puts his TNT Championship on the line when he takes on Tony Nese. Plus, Death Triangle (PAC and Penta El Zero Miedo) takes on FTR (Dax Harwood and Cash Wheeler) and Jade Cargill is in action. You can catch AEW Rampage at 10pm et/7pm pt streaming on TSN Direct and on TSN.ca.

TNT Championship match: "The Spanish God" Sammy Guevara (c) vs. "The Premier Athlete" Tony Nese - Sammy Guevara makes the fourth defence of his TNT Championship on Friday night when he faces the challenge of Tony Nese. Since arriving in AEW in October, Nese has quickly amassed a string of victories on AEW Dark and AEW Dark: Elevation. Heading into Friday's match, Nese is 4-0 and one of his wins came over Guevara's close friend, Fuego del Sol. But Guevara represents a big step up in competition for Nese and he's shown no signs of giving up the belt he won from Miro in September. Having already successfully defending his title against Ethan Page, Bobby Fish and Jay Lethal, can Guevara stay golden against Nese?

Death Triangle (PAC and Penta El Zero Miedo) (w/ Alex Abrahantes) vs. AAA World Tag Team Champions FTR (Dax Harwood and Cash Wheeler) (w/ Tully Blanchard) - The ongoing feud between FTR and Death Triangle has claimed a casualty in Rey Fenix. Thanks to a beating from FTR, Fenix is unable to team with his brother on Friday night, so Death Triangle compatriot PAC takes his place. Of course, PAC is walking wounded himself, currently wearing an eyepatch and falling victim to Malakai Black's spray of mist. With bad blood boiling as the backdrop to this match, it's unlikely to be pretty. And if Blanchard weren't enough for PAC and Penta to contend with outside of the ring, could Black decide to make his presence known, as well?

Before Jade Cargill takes on Thunder Rosa in the semi-finals of the TBS Championship Tournament, the undefeated Cargill has a match on Friday night against one of Rosa's students in Janai Kai. Kai has worked for SHIMMER and Ring of Honor in the past and been in the ring with the likes of Allysin Kay, Santana Garrett and Masha Slamovich. Cargill can overlook Kai at her peril, but she has a message to send to Thunder Rosa ahead of their match, so what better way to do it than through a beating to one of her own pupils?