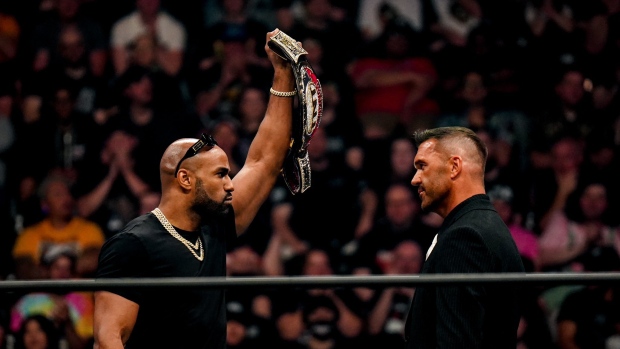 TNT Championship match: Scorpio Sky (c) (w/ Dan Lambert and Ethan Page) vs. Frankie Kazarian - The inaugural AEW World Tag Team Champions, Scorpio Sky and Frankie Kazarian will once again share the ring in a championship match, but things will be a little different this time. Sky, now TNT Champion for a second time after regaining the belt in a ladder match against Sammy Guevara, puts his title on the line against former SoCal Uncensored stablemate Kazarian. This won't be the first time that former AEW Tag Team Champions have faced off for a singles prize. "Hangman" Adam Page defeated the man he held the titles with, Kenny Omega, for the AEW World Championship at Full Gear last fall. Sky hopes that his second reign as champ will last longer than the first, but in Kazarian, he has an opponent who knows him better than just about anybody else. This is also not the first ever singles meeting between the two men. Kaz defeated Sky in a "loser leaves town" match in Pro Wrestling Guerrilla in 2007 in the culmination of one of the promotion's most memorable feuds in its early years. Can Kaz pick up his first singles gold in AEW or will Sky put his old friend away to hang on to the title?

Owen Hart Foundation Cup first-round match: Ruby Soho vs. Riho - On Dynamite, Toni Storm defeated Jamie Hayter to kick off the Owen Hart Foundation Cup tournament proper and on Rampage, we'll see the first match on the other side of the bracket as Ruby Soho meets Riho. Soho qualified for the tournament with a victory over Robyn Renegade, while Riho punched her ticket by defeated Yuka Sakazaki. While these two women have been in the ring together before, it's been as members of the same team. Friday's match is the first ever one-on-one contest between the two. Soho enters the match on quite the heater. After losing a match to Nyla Rose on the Feb. 2 Dynamite, Soho has reeled off 15 straight victories in singles and tag-team action. For Riho, this is only her second match back after a lengthy spell on the sidelines and will be a great test for the former AEW Women's World Champion to see where she's at in her return. Will Soho keep rolling or will Riho advance?

Trios match: Death Triangle (PAC, Penta Oscura and Rey Fenix) (w/ Alex Abrahantes) vs. Andrade Family Office (The Butcher, The Blade and Marq Quen (w/ The Bunny, Isiah Kassidy and Jose the Assistant) - Death Triangle makes their long-awaited return to action as a trio in their first match together in nearly six months. Their opponents are men they know very well in the AFO's The Butcher, The Blade and Marq Quen. The big question mark heading into the contest is what kind of condition Rey Fenix is in. After a lengthy injury that kept him out of action for over three months, Fenix has now wrestled twice in his return - teaming with El Hijo del Vikingo in a loss to the Young Bucks (Nick Jackson and Matt Jackson) at AAA's TripleMania XXX: Monterrey show and a victory over Dante Martin in an Owen Hart qualifier on last week's Dynamite - and appears to be showing no ill-effects of his layoff. While the AFO will present Death Triangle with a tricky match, they still know that another confrontation with the House of Black (Malakai Black, Brody King and Buddy Matthews) is on the horizon. But they can overlook the AFO at their own peril. Which of these trios will emerge victorious?

"The Chairman" Shawn Spears vs. Bear Boulder - Tried as he might, nothing that Maxwell Jacob Friedman has put in the path of Wardlow has been able to deter him. Wardlow has run through The Butcher, "The Murderhawk Monster" Lance Archer and Impact Wrestling's W. Morrissey in his quest to get his hands on the man who signs his paycheques. With his mercenaries unable to get the job done, it appears that MJF is turning to somebody closer to task him with the responsibility of taking out the big man. But before Shawn Spears can attempt to take out Wardlow, the St. Catharines, Ont. native goes one-on-one with one half of Bear Country, Bear Boulder. Funnily enough, the only other time Spears has taken on Boulder was in tag-team action when he teamed with Wardlow of all people to beat Bear Country last fall. Friday night's match will give Spears the opportunity to state his intent towards "Mr. Mayhem." Will Spears pick up the win or will Bear Boulder pull off the upset?