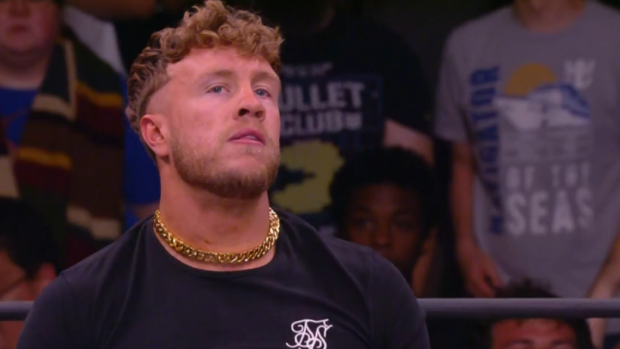 Will Ospreay , All Elite Wrestling

Former IWGP World Heavyweight Champion Will Ospreay makes his AEW in-ring debut, teaming up with Aussie Open (Mark Davis and Kyle Fletcher) to take on Trent Beretta and FTR (Dax Harwood and Cash Wheeler) in trios action. Plus, Eddie Kingston meets Jake Hager in a grudge match. You can catch AEW Rampage at 10pm et/7pm pt streaming on TSN Direct and on TSN.ca.

Trios match: ROH and AAA World Tag Team Champions FTR (Dax Harwood and Cash Wheeler) and Trent Beretta vs. United Empire (Will Ospreay, Mark Davis and Kyle Fletcher) (w/ Aaron Henare) - One of New Japan's top talents, Will Ospreay, made his AEW debut on Dynamite, coming to the ring as Trent Beretta asked FTR to give Roppongi Vice (Beretta and Rocky Romero) another shot at the ROH World Tag Team Championship. But Ospreay's presence was a ruse, meant to distract the trio from a blindside attack from members of Ospreay's United Empire with Aaron Henare and Aussie Open (Mark Davis and Kyle Fletcher). After the United Empire laid waste to Harwood, Wheeler and Beretta, Ospreay put a bow on the proceedings by nailing Beretta with his Hidden Blade elbow. The attack marked the second time that the United Empire has interfered with FTR and Beretta's business. The very reason why Beretta wanted a second shot at FTR's title is because their first match ended in a no-contest when both teams were attacked by the UE's Jeff Cobb and the Great O-Khan two weeks ago on Dynamite. While this will be the first time that FTR and Aussie Open have stepped into the ring together, Beretta and Ospreay are far from strangers, having teamed up on a number of occasions as members of CHAOS. But Ospreay turned his back on CHAOS and attacked its leader, Kazuchika Okada, in the summer of 2020. It's understandable, then, why there's no love lost between Beretta and Ospreay. Will United Empire continue to make life miserable for Beretta and FTR or will Harwood, Wheeler and Trent? welcome Ospreay and co. to AEW with a beating?

Eddie Kingston vs. Jake Hager - As the feud between Eddie Kingston and his crew (Santana, Ortiz, Jon Moxley and Bryan Danielson) and the Jericho Appreciation Society (Chris Jericho, Daniel Ortiz, Angelo Parker, Matt Menard and Jake Hager) continues to burn red-hot, the already volatile Kingston found a new reason to hate Jake Hager on Wednesday night. During the Casino Battle Royale on Dynamite to help determine an interim AEW World Championship contender, Kingston once again found himself doing battle with Garcia. After eliminating Garcia following several minutes of struggle, Kingston was blindsided and thrown over the top rope by Hager. On Friday night, Kingston gets his chance at revenge against Hager and take out his frustrations on a member of the JAS. While Hager is a two-time world champion and Bellator fighter, he might be facing a very real case of ring rust. Friday's match will be Hager's first standard singles match since February of 2021 with the former WWE World Heavyweight Champion having transitioned to wrestling mostly multi-man and tag-team matches. Getting back into singles action against an irate Kingston is jumping right into a shark-infested deep end. Can Hager pick up the victory in his return to singles competition or will Kingston make him pay for Wednesday night?

Kris Statlander vs. Red Velvet (w/ TBS Champion Jade Cargill, Kiera Hogan and Stokely Hathaway) - Former allies meet again on Friday night when Kris Statlander takes on Red Velvet. It will be the second meeting in two months between the two women. During last month's Owen Hart Foundation Cup, Statlander defeated Velvet in the first round with a roll-up. After the match, Statlander was jumped by Jade Cargill and Kiera Hogan, so the wounds from that last encounter are still fresh. But revenge isn't really what's going to be on Statlander's mind. This past week, she fell out of the AEW Rankings and will be looking for a win to get her back on track and on course for a shot at, perhaps, the undefeated Cargill's TBS Championship. Before she can even think about that, she's going to have to get past Red Velvet. Velvet is 8-3 in singles matches in 2022 and is looking to build up her own resume. Which of these two former friends can pick up the victory?

- Weeks after his arrival in AEW, the monstrous Satnam Singh makes his in-ring debut in tag-team action alongside Jay Lethal

- Fresh off of their victory at Double or Nothing against Tony Nese and "Smart" Mark Sterling, we will hear from Hookhausen (Hook and Danhausen)