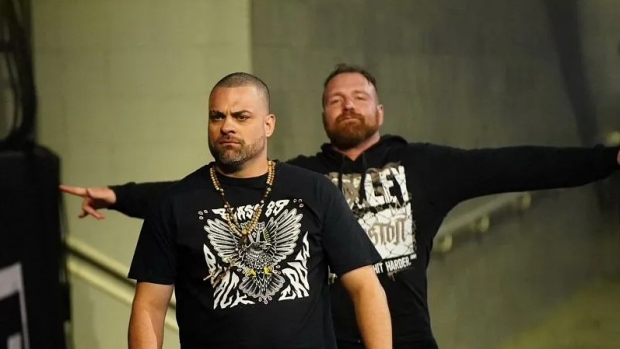 A lot can change over the course of a year.

For proof, look no further than Eddie Kingston.

When TSN.ca last caught up with the All Elite Wrestling (AEW) star last fall, he was in the midst of a whirlwind few months. After considering retirement in 2019 and with the harsh realities of the pandemic forcing him to sell some of his gear to make mortgage payments, the indie stalwart found himself in AEW and attempting to find footing in a major company for the first time in his career.

Flash forward to the present day and Kingston is one of the company’s most popular babyfaces and firmly established as one of AEW’s signature stars. Returning to the New York area, Yonkers native Kingston teams with Jon Moxley to take on Suzuki-gun (Minoru Suzuki and “The Murderhawk Monster” Lance Archer) in the main event of the second night of AEW Grand Slam from Arthur Ashe Stadium in Queens on Friday night’s AEW Rampage.

You can catch AEW Rampage: Grand Slam at 10pm et/7pm pt on the TSN app, streaming on TSN Direct and on TSN.ca

To perform in front of 20,000 fans only 40 minutes away from where he grew up is something of which Kingston says he could never dream.

“I couldn’t imagine any of this,” Kingston said. “This is all surreal to me and I’m loving every second of it. But without a doubt, it’s unbelievably surreal and never thought this [was possible].”

While Kingston believes that his success is confirmation that his choice to stick with pro wrestling was the right one, he’s quick to point out that he wasn’t the only party to take a risk.

“Without a doubt, it’s validated my decision to stay at it and it gives AEW validation for taking a chance on me,” Kingston said. “They didn’t have to take this chance on me.”

With nearly two decades of wrestling under his belt, the rise to stardom for Kingston has been swift, but he says it’s in his nature to stay grounded about it. As over, in wrestling parlance, as he might be with the fans, Kingston remains his own toughest critic.

“I’m getting a little sense of [his popularity], but it’s never enough,” Kingston said. “I’m never satisfied. I’m one of those guys who says to himself, ‘Well, people say you’re over, but you’re not as over as you think.’ You gotta stay humble and you gotta have that chip on your shoulder. And it’s not hard for me because I beat myself up constantly, no matter what. People can be giving me my flowers all day and telling me how great I am and at some point, I’m gonna go, ‘You know you’re nuts,’ or tell them that I’m not the world champion or TNT Champion or tag-team champion, you know that, right? I’m not as over as you think I am.”

But others might disagree. On his HWH8: Side B released on Friday, Buffalo rapper Westside Gunn has a song called “Eddie Kingston.” Kingston says he’s a big fan of Griselda and considers it an honour.

“It’s a trip, but it’s also an honour because Griselda and Westside Gunn, they do hip-hop I like,” Kingston said. “There’s a lot of hip-hop out there right now that I do not like and do not understand. So, it’s definitely flattering and it’s humbling for them to even consider, let alone put my name on a record. When I saw it, I was just blown away. I’ve been trying to meet Westside. I’ve been trying to get [Buffalo natives The] Butcher and [The] Blade to bring him backstage so we can chill.”

Central to Kingston’s ascent in the company has been his relationship with Moxley. Upon first joining the company last summer, Kingston feuded with Moxley into the fall, but turned face and aligned with the former AEW World Champion in March. Kingston thinks the believability of their rapport is what makes them click and that’s because what you’re seeing is between the two is genuine.

“It’s real,” Kingston said. “This is like how we really are backstage. This is how we are in the hotel. This is how we are on the road with each other. With me and Mox, there’s no bulls--- with us. This is us, 24 hours a day and seven days a week. We’ve been rivals, but we’ve been friends longer than rivals and we’ve just never changed and always been ourselves. Whether people like it or not, we are ourselves and have that outlaw spirit in us.”

The outlaw spirit that has given rise to Kingston has allowed him to share a ring with some legends of the business in recent weeks, including Sting.

“I was a kid again when I was in there with Sting,” Kingston said. “There’s a GIF out there where you see me mouthing ‘It’s f---ing Sting!’ It’s because I’m on TNT with the guy who carried WCW, let’s not forget that. That man never left WCW. He never left, even when everyone else did. He never left and he carried that company on his own, no matter what, through the ups and downs. He was WCW. They called him ‘The Franchise’ of the company, all those buzzwords, all that nice stuff, but the bottom line was when you think of WCW, the real people know that it was Sting who was WCW, from the beginning to the end. So, to be in the ring with him on TNT, the home of WCW years ago, was just amazing.”

With the dream of taking on Suzuki now a reality, Kingston knows which other icons he’d like to work with, something now possible more than ever thanks to the opening of the so-called “Forbidden Door.” There’s one matchup in particular that Kingston wants to make happen the most.

“Of the guys I’d like to fight, No.1 is Jun Akiyama,” Kingston said. “I’d like to fight him first and then learn what Giant Baba taught him. He was one of the last guys out there who trained under Giant Baba. Also, [Naomichi] Marufuji, I’d love to step in the ring with him, another guy who came from the All Japan dojo and then went to NOAH, without a shadow of a doubt. Marufuji is a legend, as well. There’s so many other ones, too, but those two are the main ones and if we’re gonna talk New Japan, Zack Sabre Jr., who I don’t like as a person, and I wanna fight. And also, [Hiroshi] Tanahashi, just because you want to test yourself against the best. You wanna test yourself against legends like Tanahashi. But again, Jun Akiyama is No.1. Let’s just put that out into the universe.”

But before any of that can happen, there is still the matter of Suzuki himself. As much fun as it is to step into the ring with one of Japanese wrestling’s toughest ever figures, Kingston says the reality of what that entails can be a slap in the face…quite literally.

“Suzuki is a legend, and he holds nothing back,” Kingston said. “He’s a legit badass if you wanna call him that. He’s a shooter and to be able to share the ring with him and fight him, especially in an AEW ring, is nothing but an honour and a pleasure. Stepping in there with him is like stepping in there with my heroes, like the Four Pillars [of Heaven] of All Japan [Akira Taue, Toshiaki Kawada, Kenta Kobashi and Mitsuharu Misawa] and the Three Musketeers of New Japan [Keiji Mutoh, Masahiro Chono and Shinya Hashimoto]. It’s an honour and a pleasure, but only an honour and a pleasure until he smacks you in the face. Then you’re like ‘Oh, now I gotta fight you’ and there goes all the honour and pleasure out the window.”