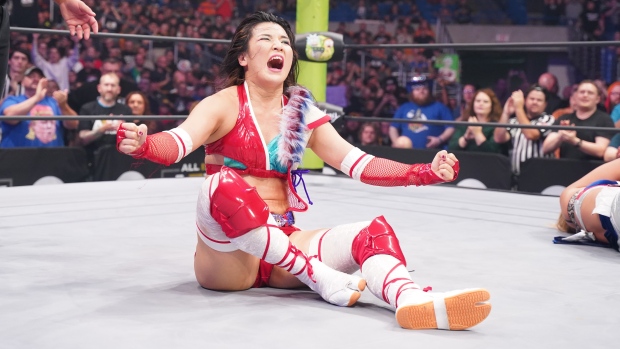 On the final Wednesday night before Fyter Fest, the AEW Women's World Champion Hikaru Shida will be in action on AEW Dynamite.

You can catch an all-new AEW Dynamite at 8pm et/5pm pt on TSN1/2, the TSN app, streaming on TSN Direct and on TSN.ca.

Women's champ Shida will also have a final tune-up match on Wednesday night ahead of her Fyter Fest title defence against "The Bad Girl" Penelope Ford. Shida was last in action two weeks ago on Dynamite in a tag-team match in which she was pinned by Ford. While Ford got the better of Shida, it was due in large part to Ford nailing Shida with her own title belt prior to the pinfall. With her match on Wednesday night, Shida will be looking to remind Ford that she's been undefeated in singles competition since April and doesn't intend to relinquish her title without a fight.

After weeks of courting him, the leader of The Dark Order, Mr. Brodie Lee, presented Colt Cabana with an envelope last week, containing what appeared to be a formal offer to join the organization. While we still don't know if Cabana has been welcomed to the fold, he will be in tag-team action on Wednesday night with "The Exalted One" as his partner as they take on the team of "The Bad Boy" Joey Janela and Sonny Kiss.

Janela and Kiss have been on a roll since starting their partnership earlier this spring and are no strangers to The Dark Order. They were last in action on this week's edition of AEW Dark, defeating The Dark Order team of Alex Reynolds and John Silver. Knowing that The Dark Order never travels alone, Janela and Kiss will have to keep their eyes on outside of the ring just as much as they need to focus on Lee in it.

Will Cabana cement his status as The Dark Order's latest recruit or will Mr. Brodie Lee be in for an unwelcome surprise?

In a battle of two of the biggest men in AEW, Luchasaurus goes one-on-one with "Mr. Mayhem" Wardlow in a lumberjack match. Jurassic Express have been at loggerheads with MJF and Wardlow for months, so it comes as no surprise that a lumberjack match was needed to house this kind of animosity. The ring will be surrounded by other AEW competitors who will be more than happy to lay their hands on whichever poor soul finds himself on the outside.

Matt Hardy's war against the Inner Circle will continue on Wednesday night when he steps in the ring with Santana. But just what version of "Multifarious" Matt Hardy will we see? Santana will have to wait until he's in the ring to find out if he's dealing with "Old School" Matt, "Unkillable" Matt or "Broken" Matt.

Have Matt's mind games already given him an edge or have they only served to anger Santana?

Speaking of the Inner Circle, "Le Champion" Chris Jericho will stand face to face with his opponent at Fyter Fest, Orange Cassidy. The feud between these two men has been simmering for some time, but it has boiled over in recent weeks. On last week's Dynamite, "Freshly Squeezed," disguised as a cameraman, cost Jericho a shot at the World Tag Team Championship at Fyter Fest by aiding Best Friends (Trent? and Chuck Taylor) to victory. That was payback from the vicious beating Jericho inflicted on Cassidy the previous week.

Now meeting in the ring face to face, what will these two men have to say (or in the case of Cassidy, have not to say) to one another?

Wednesday night's Dynamite will also feature highlights from a press conference for Fyter Fest's TNT Championship match taking place earlier in the day with champion Cody and challenger Jake Hager in attendance. Cody has been undefeated since winning the title at last month's Double or Nothing, but the hulking Hager represents Cody's biggest challenge to his championship to date.