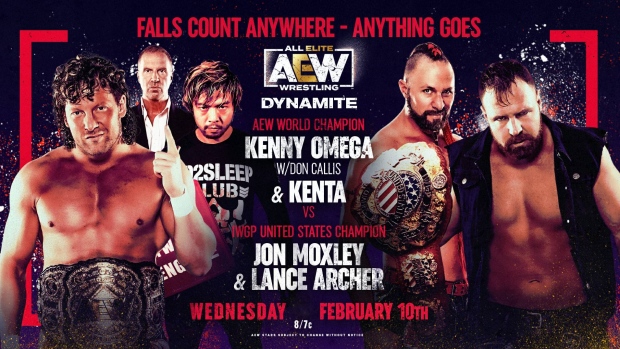 You can catch AEW Dynamite LIVE on Wednesday night at 8pm et/5pm pt on TSN2, the TSN app, streaming on TSN Direct and on TSN.ca.

Anything-goes, falls-count-anywhere tag match: AEW World Champion "The Cleaner" Kenny Omega (w/ Don Callis) and KENTA vs. IWGP United States Champion Jon Moxley and "The Murderhawk Monster" Lance Archer - KENTA made things very clear to Kenny Omega following his shocking appearance and attack on Jon Moxley after the main event of last week's Dynamite - he wasn't there to do him a favour and he wasn't there to make a peace offering from Bullet Club. KENTA came to AEW strictly to get his hands on Jon Moxley, the man who holds the IWGP US Championship that he covets. By winning last summer's New Japan Cup USA by defeating David Finlay in the final, KENTA earned himself a shot at Moxley's title and will get it on the Feb. 26 edition of New Japan Strong, but he couldn't wait until then and laid Moxley out with Go 2 Sleep last Wednesday. To even the odds on Dynamite, Mox will team up with an unlikely partner of his own - Lance Archer, who just happens to be the man Moxley beat for the IWGP US Title at Wrestle Kingdom 14 in a Texas Death Match. Will Omega and KENTA manage to coexist long enough to defeat Mox and Archer (and do enough to get Omega back in the good graces of Jay White, Tama Tonga and the rest of Bullet Club)? Can Moxley even trust Archer? Needless to say, the chances for combustibility here are very high.

TNT Championship match: Darby Allin (c) (w/ Sting) vs. "The Bad Boy" Joey Janela (w/ Sonny Kiss) - In his first title defence since beating "The Machine" Brian Cage at New Year's Smash, Darby Allin takes on an opponent that he knows very well in Joey Janela. While the pair has never met one-on-one in AEW, their matches in the past have been absolutely brutal affairs in places like Pro Wrestling Guerrilla, EVOLVE and Game Changer Wrestling. Neither man has been afraid to put his body through hell to pull out a victory, so you can only imagine what their mindset will be when the TNT Championship is on the line. There is, of course, also the matter of Team Taz. Taz, Cage, Ricky Starks and Powerhouse Hobbs all but promised to make their presence known on Wednesday night to Allin, a man with whom they remain embroiled in a bitter feud. Sting, Allin's partner at the Revolution pay-per-view against Cage and Starks, will be there to second Allin in the match, but will he alone manage to keep Team Taz at bay? Will Allin be able to focus on his challenge at hand in Janela or will Team Taz prove to be a distraction great enough to lose the TNT Title?

AEW Women's World Championship Eliminator match: "Legit" Leyla Hirsch vs. Thunder Rosa - The American side of the Eliminator bracket kicks off with a match that will certainly appeal to those who enjoy technical wrestling when the former NWA Women's World Champion Thunder Rosa meets the diminutive, but powerful Leyla Hirsch. You'll forgive Thunder Rosa is she's not in the best of moods heading into Wednesday night's match following her loss to Dr. Britt Baker on last week's Dynamite. But the Eliminator tournament provides Thunder Rosa with an opportunity to earn herself another shot at Hikaru Shida and her AEW Women's World Championship if she can refocus on the task at hand. Still, Hirsch will be no pushover as she's proven to be more than a handful during her time in AEW. As one of the emerging talents in the AEW women's division, a victory over an established star like Thunder Rosa would go a long way to cementing Hirsch's credentials. Can Hirsch pull off the upset or will Thunder Rosa get back on track as she looks to regain some gold?

Inner Circle ("Le Champion" Chris Jericho and Maxwell Jacob Friedman) (w/ Wardlow) vs. The Acclaimed (Anthony Bowens and Max Caster) - By virtue of last week's battle royal victory, Chris Jericho and MJF earned themselves a shot at The Young Bucks (Nick Jackson and Matt Jackson) and their AEW World Tag Team Championship at next month's Revolution PPV. But for they can get there, they will do battle with Anthony Bowens and Max Caster on Wednesday night. If you don't recall that it was Caster who eliminated MJF from last week's battle royal, rest assured that MJF himself does. Like Allin and Janela, MJF has a history with Caster and Bowens that predates their time in AEW. All three men learned under the tutelage of Pat Buck and Brian Myers and cut their teeth in Combat Zone Wrestling and MJF would love nothing more than prove that he is the gold standard for their training. Bragging rights aside, there are more tangible reasons for The Acclaimed to want to pull out a victory over Inner Circle on Wednesday night. Should they defeat Jericho and MJF and that duo goes on to beat the Jacksons for the tag titles, The Acclaimed will have an excellent case to get a title shot of their own. Can the Inner Circle stay hot on the road to Revolution or will The Acclaimed send a strong signal of intent to the rest of AEW's tag division?

The Nightmare Family ("The American Nightmare" Cody Rhodes (w/ Arn Anderson) and Lee Johnson) vs. "Pretty" Peter Avalon and Cezar Bononi - After coming to AEW in the fall, Brazilian Cezar Bononi makes his Dynamite bow teaming up with Peter Avalon. While they've only tagged together for a short period of time, Bononi and Avalon are undefeated as a team, but face a major challenge in The Nightmare Family's Cody Rhodes and Lee Johnson. Like Avalon and Bononi, Johnson's exposure on Dynamite has been limited thus far in his AEW career - this is Johnson's first match on Dynamite since December - and teaming with Rhodes on Wednesday night will put a big spotlight on what he's capable of. As Rhodes readies to team up with Red Velvet to take on Jade Cargill and Shaquille O'Neal next month, he faces a familiar foe in Avalon. It was last month that Rhodes stopped Avalon's improbable five-match winning streak dead in its tracks with a victory on Dynamite. Can Rhodes make it two in a row or will Avalon avenge that loss?

"The Bastard" PAC vs. "Hollywood Hunk" Ryan Nemeth - Ryan Nemeth earned his first victory in AEW when he defeated Marko Stunt on last week's edition of AEW Dark. But his one-match winning streak is in serious jeopardy on Wednesday night when he takes on PAC, who will be in a foul mood (well, PAC is always in a foul mood, really). "The Bastard" was on the losing end of last week's six-man main event when he, Jon Moxley and Rey Fenix fell to Kenny Omega and The Good Brothers (Doc Gallows and Karl Anderson). Since his return to AEW in November, PAC is undefeated in singles competition and will look to pick up another win on Wednesday night. While PAC has been feuding in recent weeks with Eddie Kingston, The Butcher and The Blade, his run of success hasn't gone unnoticed by AEW management. PAC is currently in at No. 5 in the AEW Rankings and working his way towards a title shot. Will PAC continue his streak of dominance or will Nemeth manage to pull off the biggest upset of his AEW career thus far?