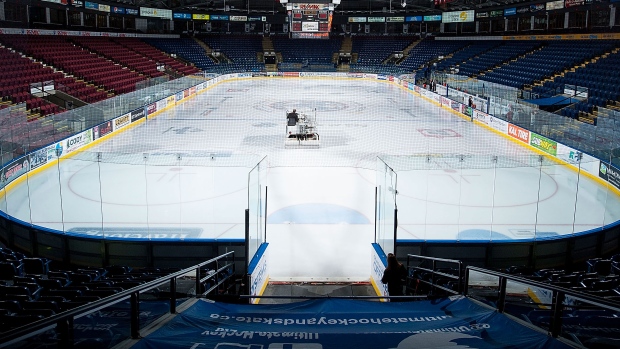 Warning: This story contains extremely graphic content and language that may be upsetting to some readers.

The stories of alleged abuse, sexual and otherwise, harassment, and hazing in junior hockey were detailed in affidavits filed in an Ontario Superior Court in Toronto on Monday by 16 former Canadian Hockey League players. None of the allegations have been proven in court.

CTV News and TSN have a policy against naming victims of sexual assault without their consent.

Six months ago, former CHL players Dan Carcillo and Garrett Taylor filed a claim against the CHL alleging that the league, its teams, and their executives “have perpetuated a toxic environment which condones violent, discriminatory, racist, sexualized, and homophobic conduct, including physical and sexual assault, on the underage players that they are obliged to protect.”

The affidavits of 10 additional former players were among four volumes of documents filed Monday in court  by lawyers for the plaintiffs. The lawyers hope that the players' stories will establish that there has been a systemic problem of hazing and abuse and will convince a judge to approve their motion to proceed with the case as a class-action lawsuit.

If that motion is approved, all current and former CHL players would become plaintiffs in the case, except those who decide to opt out. It could be a year or more before the court reaches a decision on whether the case will move forward as a class action.

CHL president Dan MacKenzie did not respond to an email requesting comment.

In July, days after the claim against the league was filed by Carcillo and Taylor, the CHL said in a statement that the league was “deeply troubled” by abuse allegations and formed a panel to deal with abuse issues that is chaired by former New Brunswick premier Camille Theriault and includes ex-NHLer Sheldon Kennedy and long-time women’s hockey coach Daniele Sauvageau.

The CHL said at the time that the goal was to have the panel’s report completed in time for the start of the 2020-21 season.

Lawyers for the former CHL players also filed with the court an expert report written by Jay Johnson, a University of Manitoba professor who has studied the issue of hazing, initiations and rites of passage.

Johnson described in his report the cyclical nature of abuse on Canadian junior hockey – repeated abuse scandals followed by efforts to reform the game.

“I have heard the same stories regarding the same explicit rituals time and time again,” Johnson wrote in his report. “Hazing and abuse are ingrained in this culture. Both the intense severity of the abuse and the commonality of the practices are particular to junior hockey in the CHL. The same types of rituals are practiced across Canada from Halifax to Quebec City to Vancouver Island over years and decades…Hockey hazing continues to this day with management fully aware of its presence.”

Smith, who was a rookie with the Ottawa 67’s during the 1979-80 season, alleged in his July 10, 2020, affidavit that being a first-year player was “like being on the front lines in a war and having people shoot at you with nowhere to hide. I knew it was coming.”

“I was jumped in the change room,” Smith wrote. “I was blindfolded. The older players held me down, tied me up and took off my clothes. I was naked. They shaved my genitals. They slapped me around. They threw cold water and hot water over me. They covered my genitals in Rub A535. It was terrifying and extremely painful.”

Smith wrote that he was taped up, placed by his teammates in a metal grocery cart and secured to the cart, which was rolled to centre ice at the arena and left there.

“They closed the doors and turned off the lights,” Smith wrote. “I do not know how long I was there for. It could have been an hour, but I can't say for sure. Eventually, a trainer came out and released me. For the first three months of that year, the abuse was constant. If you couldn't take it, you were out. No exceptions. Some players left the team as a result of the hazing.”

Smith alleged that the hazing he suffered impacted his emotional and mental health even today.

“It should never have happened,” he wrote. “I still live with it to this day.”

Fred Ledlin, who played in the Western Hockey League between 1980 and 1984, said when he was a 17-year-old rookie with the Victoria Cougars during the 1980-81 season, a hockey stick was forcibly inserted into his anus and heat ointment was placed in his urethra using a pin.

“Boys were required to perform for the older players on a stage,” Ledlin alleged in his Aug. 4, 2020, affidavit. “The older players would defecate on the stage and make the rookies throw their feces at each other… boys were required to read from Penthouse magazine. Depending on the ‘game,’ if you got an erection, or didn’t get an erection, you would be severely hazed…”

The following season, when Ledlin was playing with the Kamloops Junior Oilers, he said he was made to bathe in the older players’ urine.

“Another common occurrence was when the older players would tape you to hockey sticks with your arms and legs sticking out so you couldn’t move,” Ledlin wrote. “They would tie a skate lace to your penis and throw it over a venting pipe. They would tie the other end to a bucket. Then the older players would throw pucks into the bucket one by one to see how many pucks you could take. This was excruciatingly painful. I saw one kid take 28 pucks. I remember another taking 49 pucks while the whole team watched. I can't imagine how that player's penis was not permanently damaged. This happened on a number of the teams I played on. The coaches all knew this stuff was going on. A lot of it happened on the bus. Everybody in the league knew it was going on.”

Ledlin wrote that he witnessed more abuse after he was traded to Seattle from Kamloops. He alleged that older players on the Seattle team would hire prostitutes to have sex with the players.

“The veterans would draw a name out of a hat to pick what rookie would have sex with the prostitutes,” he wrote. “I don’t think the rookies wanted to, but they had no choice.”

Other players wrote that they experienced a range of sexual, physical and psychological abuse.

One player in the Western Hockey League alleged that when he played in the league in the 1980s, he was placed with a single man who repeatedly propositioned him sexually. When he complained to his team, his general manager threatened him and told him to keep quiet. After he was moved to a different billet home, the player learned that the man was a convicted pedophile. His team later placed another player in the man’s home.

One player whose OHL career ended in 2014 wrote of attending a team training camp when he was a rookie in 2009.

“Toward the end of the day, we went into the locker room to take a shower,” the player wrote. “All of the veteran players started saying ‘rookie dicks, let's see those rookie dicks.’ They lined us up, told us to strip naked and made fun of our genitals. I remember being particularly embarrassed by this, because I was only 15.”

The player also wrote about the “rookie dance off" in which each rookie was required to do a strip tease in front of the older players until they were naked. The player who "lost" would be verbally abused.

Another former OHL player who played in the 1990s wrote that he had become an alcoholic and addicted to cocaine because of the abuse he suffered while playing in the league.

A separate OHL player who also played in the 1990s wrote of a hazing practice known as “mashing.”