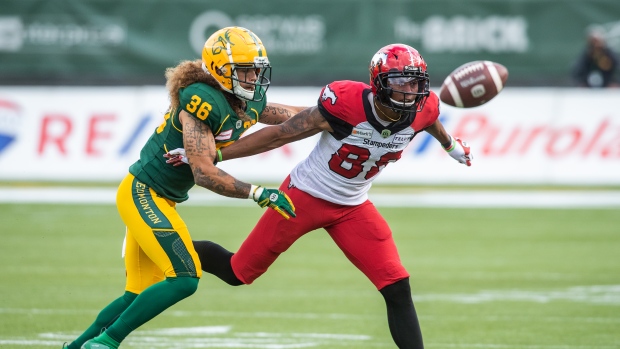 The author of the best CFL comeback story this season is in Calgary.

In 2018, Kamar Jorden was among the league leaders in receiving yards. Through 10 games, the Stampeders wide receiver had amassed 55 catches for 944 yards and six touchdowns. Then, during the 2018 Labour Day Classic against Edmonton, Jorden’s knee buckled while he was blocking on a running play. He tore three ligaments, resulting in season-ending knee surgery. He missed the playoffs – Calgary finished first in the West Division and then went on to win the Grey Cup that year – plus the entire 2019 regular season before coming back to catch two passes in Calgary’s West Division Semifinal loss to the eventual Grey Cup champion Winnipeg Blue Bombers.

“It was definitely a long journey. When I first got to the hospital, I was more worried if I could even play again,” he said in April 2020, about the injury. “Once the doctor assured me what they planned to do with my knee to get me to play again – he told me everything will go well based on the work I put in – that’s all I needed to hear. Just hearing that I’ll be able to play again, to run on it, basically it was just full steam ahead from there.”

The cancellation of the 2020 CFL season due to the COVID-19 pandemic prolonged his return to the playing field, but now, barely three years after his career was in jeopardy, Jorden is once considered one of the CFL’s elite receivers. Through six games this season, the 2018 CFL West Division all-star leads the league in receiving yards (516), receptions (37), and is tied for second in touchdowns (3). He’s also eighth in yards after the catch (115).

Following an impressive Week 6 performance in the Labour Day rematch against the Elks in Edmonton last Saturday, where he caught 12 passes for 159 yards and a touchdown in a 32-16 Calgary win, Jorden was named one of the league’s top performers.

“It’s definitely satisfying,” Jorden said this week, about the honour. “It’s way more satisfying with a win, believe that. That award doesn’t mean as much if we had come out of there with a loss. That’s the most important part.”

Stampeders quarterback Bo Levi Mitchell, in his first start since injuring his foot in a Week 2 loss to the BC Lions, couldn’t praise his longtime pass-catcher enough.

“That man was out there,” he said after Saturday’s win.

“I watched him in the off-season trying to fight back and you see a lot of that head-down disappointment because you don’t know if you’ll get back to who you were [pre-injury]. I’ve gone through it myself, but watching him through training camp and coming back for Game 1, when he ran the dig over the top and I threw it to him in double coverage and he went up and got it, to me I just saw something click.”

“I just want to make the plays that come to me,” Jorden said. “I felt like Bo trusted me a little bit to make some plays and I’m happy I was able to go out there and do that and help the team.”

Stampeders head coach Dave Dickenson lauded the 32-year-old’s dedication to his craft and commitment to Calgary. Jorden, who hails from the Philadelphia suburbs, lives in Calgary most of the year and is active in the community.

“He’s been here the whole time,” Dickenson said. “He’s made Canada his home. Calgary is where we want him and where he wants to be. He is a good story, a massive injury. Even us though, maybe we forgot how good he is.”

Throughout the gruelling recovery process, Jorden always felt he would return to his elite form of 2018.

“I never stopped thinking I was not that guy,” he said.

“I’ve always felt like that guy. I felt like I was that guy in the playoffs…I’ve got that confidence. I’ve been here for a minute. I was able to watch guys like Marquay [McDaniel], Nic [Lewis], Eric [Rodgers]…the list goes on, but the number of great receivers I was able to be in the room with and just learn and feed off and take little things from has added to my game.”

Now, opposing defences are again watching Jorden as he hopes to play a key role in a Stampeders playoff push.

“Watching KJ was definitely inspiring and what he’s done this season is amazing,” Mitchell said.