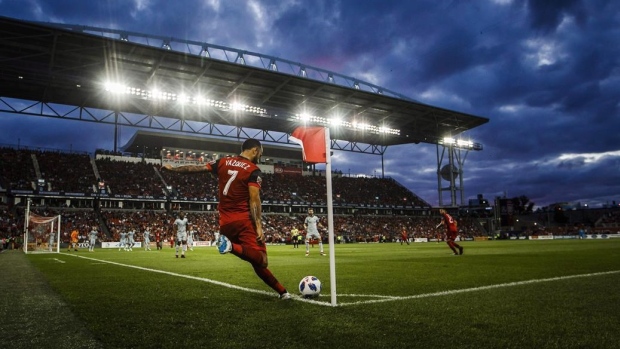 A new grass surface will be laid next month, with improved lighting and irrigation. And in April, the field will be strengthened by artificial fibres that will hold the surface together, protect the grass and reduce recovery time between events.

SISGrass is a reinforced turf system with 95 per cent natural grass that is already in use at Barcelona, Chelsea, Newcastle United and Glasgow Celtic stadiums or training grounds as well as the Green Bay Packers' Lambeau Field. Using special machines, the artificial fibres will be stitched in during a FIFA international break.

"It gives the natural grass the ability to wrap its root around a piece of plastic, basically," Robert Heggie, chief groundskeeper at BMO Field, said in an interview. "And it kind of acts like Rebar for the soil. It gives the plant something artificial to actually anchor itself into."

"Because whether it looks pretty or not, it's always going to hold itself together," he said. "Hopefully we can always have it looking pretty but you are always going to have that safety in the playability of that hybrid surface."

Other BMO Field improvement plans include:

— Upgrading the warming system controls so they are fully self-automated.

"We learned from it and here's what we're doing to make it better," Bill Manning, president of TFC and the Argos, said of the grass problems.

The groundskeepers will use walk-behind mowers once the hybrid is installed.

Toronto opted not to install a new surface after the 2017 MLS Cup because of winter and the short off-season. The grass took a beating from the get-go thanks to CONCACAF Champions League play.

A new grass surface was subsequently laid in May.

"In some ways our guys have been playing on a little bit of a cow pasture,'' Manning said at the time. "And it's been very difficult. Mother Nature was not kind to us this winter.''

But a rescheduled June 13 game against D.C. United reduced the amount of time the new surface had to settle and complaints mounted as the season wore on.

Heggie says a re-sod normally needs seven to eight weeks. He had five, which was reduced to 2 1/2 due to the schedule change.

"We can only push the plant so fast," he said.

A hot summer didn't help matters. The field, which is built on sand, got thinner and the sand began to appear on the surface, much to the players' ire.

"The field here has really hurt us, there's no two ways about it," captain Michael Bradley said in May prior to the last grass installation. "That's not an excuse but that's the reality.

Toronto put in a new grass field after BMO Field hosted the Centennial Classic outdoor hockey game in January 2017. After the MLS Cup last December, club officials debated whether to install a new surface but elected to wait out of the concern that it might not take over the winter.

The new grass will be the sixth at BMO Field, which has undergone considerable construction to expand and improve the original venue that opened in 2007 with artificial turf.

The surface has also been an issue for the CFL, although its concern is the fact that the entire north end zone is artificial turf as is a portion of the south end zone.

The difference in surfaces has caused problems, with players slipping at key moments.

Manning says Argos GM Jim Popp has approved a new type of artificial turf for the end zone "that will match much closer the new field we have."

In other stadium matters, Manning is looking at reconfiguring entry into BMO Field because of the logjam at Gate 1 in the northeast corner which is used by 75 per cent of fans attending games.

He points to the Sept. 15 game against the Los Angeles Galaxy that attracted a crowd of 30,799. At kickoff, there were only 11,000 people scanned in with others waiting to get in or arriving late.

"We have to physically do something so people can get in quicker," he said. "So we've got to re-imagine the entrances. It may not be a 2019 project, it may be 2020. We've invested in this facility, made it a nice place. But if people can't get in ..."