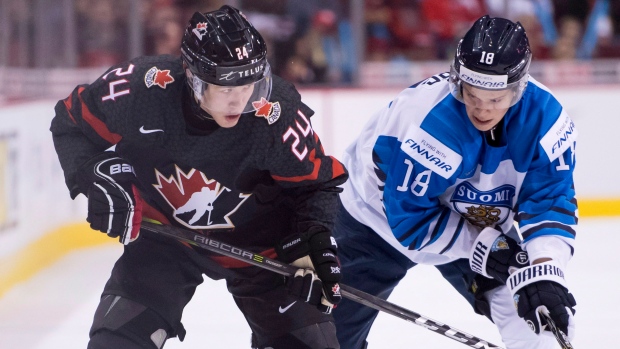 TSN reporter Mark Masters checks in daily with news and notes on Team Canada, which held an off-ice workout on Saturday in Vancouver ahead of their game against the Czech Republic.

In his first NHL training camp this fall, Spokane Chiefs defenceman Ty Smith made a big impression on the Devils.

"I thought he played really well," Taylor Hall said in a November interview. "He has so much patience and poise with the puck that he makes the game look easy out there, almost a bit too easy. He maybe looks a little bit nonchalant, but he’s such a good skater and really controls the game well from the back end."

Smith, New Jersey's first-round pick (No. 17 overall) in June, almost earned a look with the big club as an 18-year-old.

"He came in and had an excellent training camp," said Devils coach John Hynes during a November trip through Toronto. "He was one of our last cuts. He made it really difficult for us to be able to cut him. We felt there were lots of parts of his game that he could play in the NHL now. He has tremendous hockey sense, poised with the puck, he’s a very competitive guy and I think you see that in the season he’s having in junior. He’s really been a dominant player."

Smith logs big minutes in the WHL where he's racked up 39 points in 28 games this season. However, his World Juniors campaign got off to a rocky start on Wednesday against Denmark as Smith extended shifts during the blowout win earning a rebuke from head coach Tim Hunter. He responded the right way against the Swiss.

"Last game he played was outstanding," Hunter raved. "Thirty-seven second average shift and he was jumping in the play at the right time. He was urgent defensively and offensively. When he was averaging one minute per shift, you can't play like that. Last game was the best game we've seen him play so I know he's going to get better, because he's in that mindset."

Smith got the message after making a poor first impression, but Alexis Lafrenière did not. Team Canada's youngest player was benched in the third period of Thursday's win and was criticized by Hunter afterwards.

Hunter, who also scaled back the playing time of 18-year-old forward Joe Veleno, believes it's important that his message gets through.

"It was typical young guys, they think it’s about the points and not the process," he explained. "And then you worry about the next game. So, the next game, if it’s going on, you have to curb it and hope it doesn't happen again so that’s the only reaction. That’s how you coach. That’s how guys get better."

But Hunter also made it clear he hasn't lost faith in Lafrenière, who is projected to go first overall in the 2020 NHL draft and has scored 59 goals in 91 games in his QMJHL career so far.

"He’s going to have an impact in the tournament and we’re patient with him and that’s what you do with a young hockey player," the coach noted.

Hunter is also preaching patience with his power play, which is 1/8 at the World Juniors despite boasting an abundance of weapons. The issues actually predate the start of the tournament as Canada allowed a shorthanded goal in the final pre-competition game against Finland failing to convert on a lengthy two-man advantage in that game as well.

"Jack Studnicka had two great chances right in the slot," Hunter observed when asked about the Swiss game. "He’s just got to realize that butterfly goalies, they’re down and it’s got to be 18 inches over the pads and he’s just got to bear down there."

Hunter also pointed out that his club team in Moose Jaw has had the same personnel on the power play all season and last night broke out of a slump with a big goal in overtime against Swift Current. So, the coach wants to remain as patient as possible with his units here although in a short tournament he can't wait too long.

"If we don’t have success tonight then we'll look at it again, because that will be a little too much," Hunter said, "but we’re not going to change things just because it didn’t have success in the second game of our tournament."

The Czechs, meanwhile, have been stingy on the penalty kill so far, allowing just one goal on 11 chances against.

Hunter has urged London Knights defenceman Evan Bouchard to push the pace and likes the way the Oilers prospect has responded.

"He's playing faster than I’ve seen him play," Hunter noted, "and we talked to him in the summer and we talked to him at the selection camp about playing faster and he’s playing faster and he can still play faster not unlike everyone else ... We’d just like him to skate a bit more and be a little bit more aggressive with his speed and closing his gap and checking and that comes with learning how we want to play. These guys are still learning how I want them to play as a team, it's a process."
---

Hunter won't be as forthcoming about his lineup moving forward.