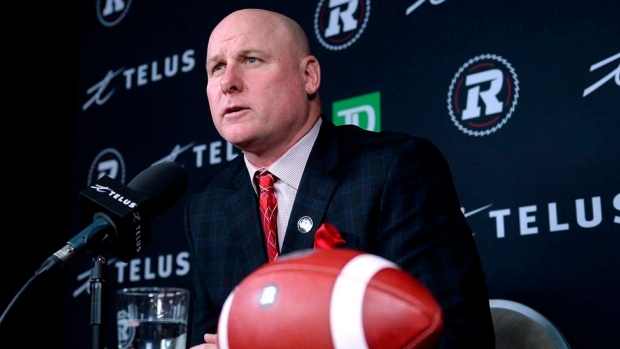 OTTAWA — It's been nearly seven years since Paul LaPolice was a head coach in the CFL.

After soaking up four more years of experience on the sidelines, LaPolice says he's ready for another opportunity.

The Ottawa Redblacks officially introduced LaPolice on Monday as the second head coach in the franchise's six-year history. The club announced Saturday that the 49-year-old LaPolice agreed to a three-year contract.

"I'm humbled and honoured to be the head coach of the Redblacks," LaPolice said.

"I don't have any grand aspirations or bold statements to say. I will say this, we will leave no stone unturned in our game planning, our preparation and our willingness to work on a daily basis to put us in a position to win championships. I expect our team to play fast, to play physical and have fun on a daily basis and always worry about our process, not the end result."

The opening in Ottawa became available following Rick Campell's surprise decision to quit with one year remaining on his contract. Campell had been head coach since the Redblacks' inaugural 2014 season.

Ottawa general manager Marcel Desjardins said the Redblacks spoke to a number of candidates, and even asked some of its players for what they might want in a head coach. LaPolice was the individual who proved to be the best fit.

"We started (the process) by talking to a number of our key players, leaders on our team as we were just trying to get a sense of what they were looking for in a head coach," Desjardins said. "The three main criteria for them were a head coach who was a very good communicator who was going to build a solid staff and also somebody who had a passion and a will to win, but also to prepare to win."

LaPolice most recently served as the Grey Cup champion Winnipeg Blue Bombers offensive co-ordinator and will be the primary play caller for the Redblacks, who finished with a 3-15-0 record in 2019.

"To have that offensive guru as our head coach is massive," Desjardins said. "He just knows how to employ all the different parts of the roster, which you can't say about everybody."

LaPolice hopes to round out his staff fairly quickly and hinted some announcements could be coming within a few days.

This year's Bombers were impressive averaging 24.6 offensive points per game to finish the season with 508, while the Redblacks posted just 312.

Desjardins said now the focus will be on the roster, especially finding a starting QB.

"We just need to find some difference makers and some playmakers and figure out how we're going to distribute the ratio," Desjardins said. "(The quarterback) is the engine that makes everything run and it's a big piece of it and we'll do whatever we have to do to get the right guy."

LaPolice believes his past experiences as both a head coach and co-ordinator will serve him well in this new challenge.

"I'm a better football coach as I've had more experiences and been around other people and been in other organizations," LaPolice said. "Four years in one organization to take notes on this is how you would do this and see situations and how I would handle things differently."

Campbell, now head coach of the B.C. Lions, said at his exit press conference that communication between he and Desjardins had deteriorated and the two no longer seemed to be on the same page.

LaPolice was aware of the situation and said he did his own due diligence. He feels he will work well with Desjardins.

"It's important to have conversations about how we do things and how our processes are and then you look at the big picture," LaPolice said. "We made sure we communicated and made sure we were on the same page, as much as you can be. I heard a lot of good things about Marcel."

While excited for the opportunity, LaPolice admitted accepting the job in Ottawa was a family decision.

With three young children, Payton, 12, Joshua, 9, and Mallory, 6, LaPolice and his wife, Tina, a Winnipeg native, wanted to ensure the move was good for the family.