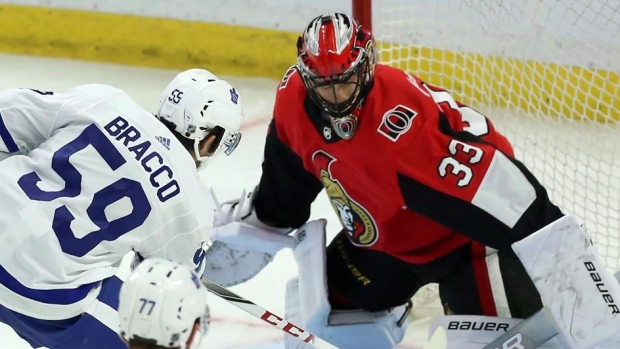 TORONTO — Jeremy Bracco wants to make one thing clear — he has a team-first mentality and was ecstatic when his Toronto Marlies hoisted the Calder Cup last June.

The thing is, finding yourself in the middle of the action is a lot more fun.

After being made a healthy scratch for most of Toronto's run through the 2018 American Hockey League playoffs, Bracco is front and centre as this iteration of the Marlies prepares to open the Eastern Conference final.

Second in the AHL's overall regular-season scoring race with 79 points, the 22-year-old added two goals and nine assists through seven post-season games as Toronto swept the first two rounds of the playoffs.

And his ego-damaging experience 12 months ago makes that success even sweeter.

"It was tough," Bracco said after practice earlier this week. "But I just want to win in the end."

Selected 61st overall by the Maple Leafs in the 2015 draft, the winger came into 2017-18 off a Memorial Cup victory with the OHL's Windsor Spitfires where he led his team in scoring at the tournament.

Bracco wasn't used to getting told he'd be the one to sit — it had never happened — but suited up for just four of Toronto's 20 playoff games last spring. In all, he played just 54 of the Marlies' 96 games in his first pro season.

"It leaves a little chip on your shoulder," Bracco said. "Nobody wants to watch. That was something that motivated me."

Scratched last spring after Andreas Johnsson returned from the Leafs, the five-foot-11, 171-pound Bracco focused on everything from conditioning to nutrition to how he spends his down time.

"He was never short on confidence, but there was some insecurity there because he hadn't proven himself at this level," Keefe said. "Clearly he's gotten over that ... he just knows and feels that he's such a vital part of our team."

Keefe said the commitment shown by Bracco, who had 22 goals and 57 assists in the regular season, has given him the ability to battle through tough matchups.

"He's a marked man and (opponents) are well aware of him," said the coach. "Taking care of himself off the ice, being prepared mentally, physically for those challenges has really helped."

"The sky's the limit," said the 33-year-old, who had 65 points in the regular season and has nine more in the playoffs. "He proved he could be an offensive catalyst. He wants the puck, he wants to do well, he wants to make plays for other people.

"When you start rolling with a player with his skill set, he's unstoppable."

A pass-first talent, it's always been Bracco's nature to look for a teammate rather than shoot. No matter what sport he's watching, the native of Freeport, N.Y., appreciates the setup — a no-look feed in basketball, a bending cross in soccer — more than the actual finish.

"It's something that's always been ingrained in me," Bracco said with a smile. "Keefer would sometimes like me to check off on that idea and shoot it, but it's something I'll always have and be thankful to have.

"Some of the guys make fun of me that I celebrate more on assists than I do on goals."

That vision is no doubt part of what drew him to the Leafs, who could very well be calling on his services in the not-too-distant future.

Depending on what the big club does this summer with a looming salary cap crunch — Mitch Marner needs a massive raise and the trading of other forwards remains a possibility — spots for younger, cheaper options could materialize.

Bracco looks at former Marlies teammates Johnsson and defenceman Travis Dermott, and winger Trevor Moore, who is back in the AHL for the 2019 playoff push after an audition with the Leafs this season, as examples of players putting in the work and getting rewarded.

"You want to be one of those guys, but when a buddy does that it's pretty special," Bracco said. "Everybody here wants to play in the NHL one day. Everybody's working towards that goal. Hopefully it will happen for some of us."

Bracco would appear to be on that path.