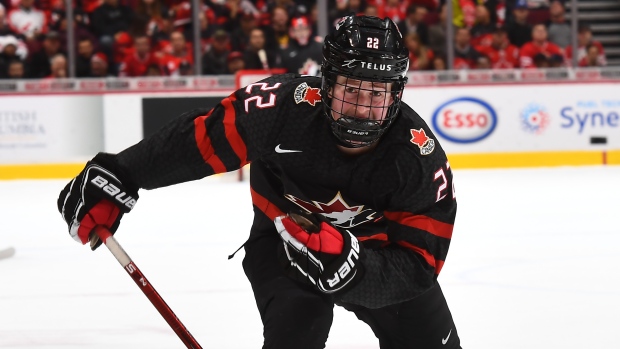 According to EliteProspects.com, this is the youngest Team Canada ever at the World Juniors with an average age of 18.61 years.

"Everyone here deserves to be here," Hockey Canada management group leader Mark Hunter said. "That's what we looked at, who can play the best, and we evaluated from summertime to here. We put (age) aside, we picked who has the most talent and who can help the team win."

The World Juniors have long been viewed as a 19-year-old event and Canada’s deep talent pool usually makes it tough for under-agers to crack the roster, but this year, Canada actually has four first-year, draft-eligible players. On the eve of the tournament, Hunter offered TSN a scouting report on his youngest players starting with returnee Alexis Lafrenière.

Lafrenière was benched during last year’s World Juniors and ended up only playing a depth role in Vancouver. This year, the Rimouski left winger is on the top line and top power play unit.

"He's grown up," Hunter observed of the reigning CHL player of the year. "He plays a real good two-way game now, he understands what needs to be done to win hockey games, how to win games … he sees he's got to play both ends of the ice."

Quinton Byfield is challenging Lafreniere atop this year's draft class and will also start in a top-six role. A natural centre, the six-foot-four Byfield has been skating on the left wing on a line with Arizona's Barrett Hayton and Lethbridge's Dylan​ Cozens.

"He's looked good," said Hunter. "He’s a young man that's really taken all this stuff in and we hope for good things for him in this tournament, but only time's going to tell."

"It's hard to believe he's that young," Hayton said. "Obviously, he looks like a man out there the way he shields the puck, protects the puck and the way he can take over a game is impressive. His hockey sense is something that's not really talked out, but he has a great feel for the game."

Jamie Drysdale is a rare 17-year-old to make Canada on defence (only the seventh since 1991) and while he started each pre-tournament game as the seventh defenceman, the Erie Otter looked at ease at this level and has potential to carve out a bigger role.

"His skating does wonders for him," Hunter noted. "I think he plays like a Victor Mete, who just skates and does things and keeps pucks out of our zone. His gaps are excellent so he's really done a great job to present himself here and just continue to get better and better."

Drummondville forward Dawson Mercer wasn’t invited to the World Junior Showcase in the summer, but used to a strong performance in the QMJHL Russia series games to catapult himself into the conversation. On the bubble until the final cut, Mercer scored in Canada's first pre-tournament game against the Swiss.

"I like his intelligence," Hunter said. "He makes intelligent plays. I feel like he plays two ways, which we wanted and he's continued to get better since Day 1 of camp and hopefully he can continue to do that and win some big games for us."

While the NHL is getting younger and younger, Hunter doesn’t necessarily believe this is the start of a new trend for Hockey Canada at the World Juniors.

"It just depends on the years," he said. "You know what, every year is different so we'll see next year what age it is. We have a lot of 18-year-olds playing this year and there's going to be a lot ... playing as 19-year-olds in Edmonton (next year) so that can happen, we'll have to see. The bottom line is we picked these players based on who's the best, did a lot of evaluation on them and that’s the conclusion we came up with."

Before turning in each night, Team Canada's players turn in their phones to the team staff.

"The players understand they need to get to sleep, but do their friends? Do their families?" asked Hockey Canada director of men’s national teams Shawn Bullock. "Does everyone back home understand there is that major time change? We started explaining that in the summer, why we do those things and how important it's going to be over here to get that quality of sleep, no disruptions with phones buzzing or anything of that nature."

Defenceman Kevin Bahl is grateful for the policy, especially since his NHL rights were traded in a deal that broke around 11 pm in Vienna where Team Canada was training.

But, not everyone is a fan.

"My girlfriend doesn't like it too much," said goalie Nico Daws with a laugh. "But, no, it's good. Sleep's very important. Anything to get an upper hand in this tournament and it definitely helps."

"It's critical for these guys to get their rest so they can perform at an elite level," Bullock concluded. "This tournament happens real fast and at an elite level and we need to be fresh."

Canada's goaltending situation is coming into focus. Dale Hunter has confirmed that Moncton's Olivier Rodrigue, who was scratched in both pre-tournament games, will start as the third goalie.

The coach wasn't ready to name a starter after Monday's game, but Daws appears to have a leg up. He didn't allow a goal in regulation or overtime in his two exhibition appearances and owns a .939 save percentage with Guelph this season.

"I felt really good, really confident," said Daws after the win over Finland. "They have a good team over there, the Finns move the puck well and I thought I did a good job in the half I played. My mindset's pretty strong, still the same as when I came, play my game and have fun with it and I’m having a lot of fun out there and the results are showing."

After splitting a shutout with Daws in the first pre-tournament game, Portland’s Joel Hofer allowed three goals against the Finns, two in regulation and one in overtime.

Daws had never played for Team Canada before this camp and a Boxing Day showdown against the Americans would undoubtedly be the biggest moment in his career.

"You try not to think about it too much," Daws said. "I mean, obviously the whole country is watching and more and there's a lot of stress in those games and a lot of pressure but, once again, I'm just here to have fun and play hockey."

Cole Caufield scored 14 goals in six games at the under-18 World Championship earlier this year, tying Alexander Ovechkin for the tournament record. Does that MVP performance give him confidence heading into his first World Juniors?

"That's in the past now, I think there's a lot of things I need to prove in this tournament too," the Montreal Canadiens first-rounder said. "I just want to prove that I'm one of the guys that can lead the team in different ways than just scoring."

But scoring is what Caufield does the best and he appears to be riding a wave of momentum heading into the World Juniors having potted four goals in a final tune-up game against the Germans on Monday.

"When a goal scorer's scoring that's a good thing," USA coach Scott Sandelin said. "He loves to do that and it was a good game for him to have for confidence. It's going to get tougher, but he finds ways. He has that smile on his face and hopefully we can keep that on there with him scoring in the tournament for us."

Caufield always finds a way despite standing just 5-foot-7, 163 pounds. He has produced 12 goals in 18 games as a freshman with the University of Wisconsin this season. Last year, he set a new single-season USA National Development Program record with 72 goals.

"He just finds those soft areas," Sandelin observed, "just knowing where pucks are going and being in the right spot or getting there at the right time is a real key to his success around the net."

"The pucks find him," noted goalie Spencer Knight, "and he finishes up close, he can finish from back far, he can take one-timers off the rush, he also can make passes too."

Caufield has a swagger about him. Asked about Daws, he says he doesn't know anything about the goalie, who burst onto the scene this season after getting passed over in the NHL draft. And Caufield doesn't plan on doing any extra scouting.

"It's all about instincts," he insisted. "I mean, if the goalie can’t see it, he's not going to be able to stop it."

Caufield says the Boxing Day showdown with Canada will be the biggest game he’s ever played in.

"I've been looking forward to this for a long time," he said.

What stands out about the rivalry with Canada?

"Just the history of everything, just the US-Canada bloodbath, even in the summer when played them it was kind of getting chippy, it’s never not intense."

Sandelin lists Caufield and Nick Robertson as the best performers in his team's shootout work so far. It was Robertson, Toronto's top pick in June's draft, who won the internal competition at Tuesday's practice.

"Unbelievable," Caufield said of Robertson. "He pulls off some crazy moves. I think it just comes natural to him. He's done some things in practice and the pre-tournament games that have just been eye-opening to me. He’s so skilled and so smart, it’s incredible."

"I like shootouts," Robertson said. "I have go-to moves and luckily it worked out."

How many go-to moves does he have?

"More than one, that's for sure," Robertson said with a grin. "You got to read the goalie and hopefully it works."

Sandelin says Team USA has worked on shootouts "two or three times" and will do it at least once more.