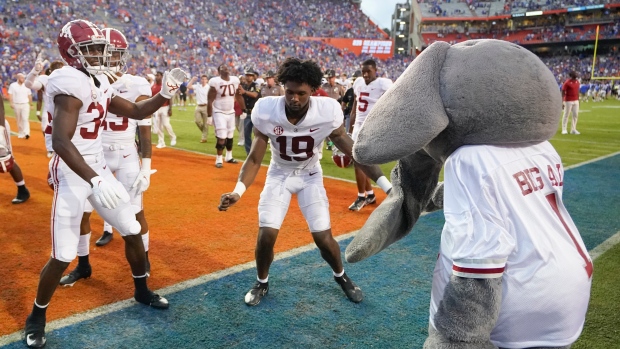 GAINESVILLE, Fla. (AP) — Bryce Young’s first collegiate road start was a rousing success, a three-touchdown performance that helped top-ranked Alabama hold off No. 11 Florida 31-29 in the Southeastern Conference opener for both teams Saturday.

The defending national champion Crimson Tide (3-0, 1-0) stopped a 2-point conversion with 3:10 left and extended its winning streak to 17, making it 32 in a row against teams from the SEC’s Eastern Division.

The Gators (2-1, 0-1) have dropped eight straight in the series and fell to 0-5 against No. 1-ranked teams at Florida Field.

This one was closer than oddsmakers and just about everyone else expected, with 14 1/2-point underdog Florida having a chance to tie the game in the closing minutes despite playing without dynamic backup quarterback Anthony Richardson.

Coach Dan Mullen held Richardson out as a precaution because of a strained right hamstring and said he would only be available in case of an emergency.

That never became the case even though the Gators trailed 21-3 at the end of the first quarter. Young built the lead with TD passes to Jase McClellan, Jahleel Billingsley and Brian Johnson.

The Gators rallied and were in position to tie late. Dameon Pierce capped a 75-yard drive with a 17-yard run that made it 31-29. But fellow running back Malik Davis failed to get the 3 yards needed on the 2-point conversion.