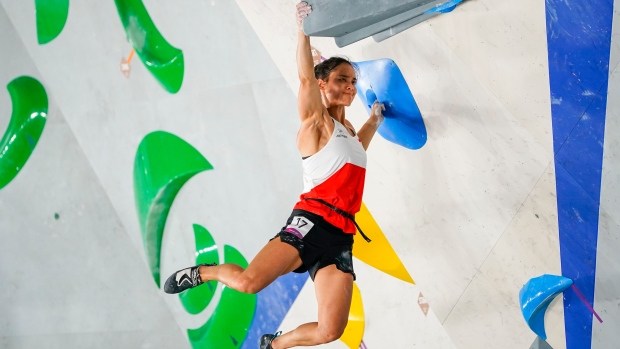 TOKYO — Alannah Yip knew in that moment she wanted to be an Olympian.

The teen was lucky enough to be sitting inside B.C. Place Stadium for the opening ceremony of the 2010 Vancouver Winter Olympics, and was mesmerized as athlete after athlete marched past.

There just wasn't a pathway for the young sport climber — familiar with straining to solve problems by using her strength, speed, finesse and intelligence — to get there.

The dream, however, never flickered.

"I was so inspired ... I was awestruck," Yip recalled. "I sat in my seat for a couple of hours not moving a muscle. I was just on edge watching the athletes walk around the stadium, imagining how proud they must be.

"I really, really wanted that."

She went on to have success on the women's pro tour, but sport climbing's inclusion on the world's biggest stage seemed unlikely.

The Tokyo Olympics changed everything, and Yip realized her dream Wednesday.

The 27-year-old from North Vancouver, B.C., finished 14th in qualifying over three separate disciplines and was eliminated from the competition at Aomi Urban Sports Park. The eight best scores out of the 20-competitor field advanced to Friday's final.

"It was a roller-coaster," said Yip, who brought a battery powered candle she got as part of the 2010 opening ceremony in her equipment bag in Tokyo. "I can be happy with some things and obviously not as pleased with other things.

One of four events added to the pandemic-delayed Games — surfing, skateboarding and karate are the others — sport climbing made its Olympic debut Tuesday with qualifying for the men's combined.

Wednesday's competition at the outdoor venue next to Tokyo Bay started at 5 p.m. with temperatures feeling like a suffocating 41 C with the humidity, although the athletes went about their business on a stage out of the sun. They were spurred on by blaring music, an over-caffeinated announcer, and volunteers bused in to help create a cheering session.

"It almost still hasn't hit me what a big thing this is," Yip said. "What I really hope from this is that tons more people in the world see climbing as a legitimate sport. When I started climbing, it was this weird fringe sport, along with some of the other sports that are now in the Games like surfing and skateboarding.

"Now we're in the Olympics."

The three sport climbing disciplines — speed, bouldering and lead — force athletes to use different skills on a series of vertical courses.

Yip was sixth following the speed event, which sees safety harness-clad competitors race up a 15-foot wall peppered with so-called "holds" before touching a button at the top, after setting a pair of personal bests, including a time of 7.99 seconds on her second attempt.

The Canadian celebrated with a double fist pump as she was gently lowered back to the stage floor.

But in bouldering, where climbers use strength and flexibility to contort themselves into awkward positions as they attempt to scale four different fixed routes dubbed "problems" to reach the top, she struggled to find traction and finished 16th.

Then in the lead discipline, where competitors try to scale a 15-metre wall using ropes known as "quickdraws" to move up as high as they can in six minutes, Yip was 12th to cement her 14th-place finish overall.

Despite the disappointment, she hopes to one day look back on these Games as the moment sport climbing started to go mainstream.

Sean McColl, a 33-year-old from North Vancouver and a Yip family friend who helped inspire her to start sport climbing, finished 17th in Tuesday's qualifying and didn't advance to the men's final on Thursday.

"I literally met Sean the day I was born," Yip said of McColl, who was instrumental in getting their sport into the Olympics. "Our parents have been friends since university. He's been a mentor for me my whole life.

"It means the world for me to be here with him."

Yip secured her Olympic spot at the 2020 Pan American Championships right before the COVID-19 pandemic brought much of the world — and sports — to a screeching halt.

She won her first national climbing championship at the age of 12 and has claimed seven national titles, and also became the first Canadian woman to advance to the final of a World Cup climbing event in 2017.

Yip can now add another accolade to her resume.

"I became an Olympian today," she said. "All the girls, we were all saying to each other, 'Hey, guys ... we're Olympians now.'"