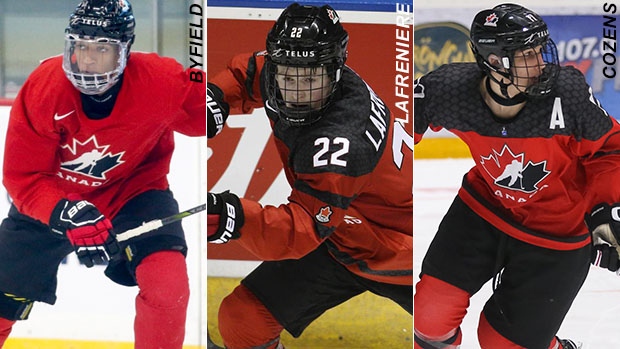 After an early quarter-final exit last January, there will be a high turnover of players this year as Hockey Canada named its selection camp roster Monday in preparation for the 2020 World Junior Hockey Championship in the Czech Republic.

Only three players from last year's World Juniors are on the list, including Rimouski star and 2020 NHL Entry Draft frontrunner Alexis Lafreniere.

The Oceanic forward - who scored one goal in five World Junior games last winter - has 17 goals and 59 points in 28 games this season in the Quebec Major Junior Hockey League. He is the only returning forward from last year's roster on the list of invitees.

There are 31 players vying for 23 final roster spots, which include two other members of Canada’s 2019 team in defencemen Jared McIsaac and Ty Smith.

Notable players not on the list include forwards Barrett Hayton of the Arizona Coyotes, Chicago Blackhawks rookie Kirby Dach, Joe Veleno from the Detroit Red Wings' AHL affiliate in Grand Rapids and New York Islanders blueliner Noah Dobson. According to TSN Hockey Insider Bob McKenzie, Veleno – who had two assists in five games last year for Canada – has an "excellent chance" of being released by the Red Wings at the end of camp.

Selection camp begins on Monday, Dec. 9 in Oakville, Ont. As part of the selection process, the players will take part in two games against a U SPORTS on Wednesday, Dec. 11 and Thursday, Dec. 12.

Canada opens the 2020 World Junior Hockey Championship on Boxing Day against the United States. Every game on the tournament can be seen live on TSN, TSN.ca, the TSN App and TSN Direct.