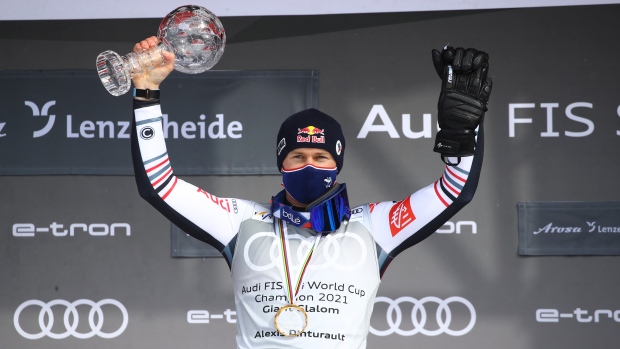 Pinturault won a giant slalom giving him an unbeatable points lead in the season-long standings over breakout Swiss star Marco Odermatt, who placed 11th in Saturday’s race on home snow at Lenzerheide.

“What a day," Pinturault said in an interview with Swiss broadcaster RTS. "It was a really beautiful battle with Marco. He will really be a big champion in our sport.”

Pinturault is the first men’s overall champion from France in 24 years, since Luc Alphand won. The only other Frenchman to win was Jean Claude-Killy, in the first two seasons after the World Cup circuit started in 1967.

The giant slalom was key because Odermatt skips slalom, which is the season-ending race on Sunday when Pinturault is also a threat to win.

As the first-run leader, Pinturault was the final starter in the second run on Saturday afternoon. He had won the overall title two minutes before he began the run as Odermatt slipped down the leaderboard.

Pinturault also won the giant slalom discipline title. The 100 points he earned with the win overtook Odermatt, who held a 25-point lead before racing.

Long predicted to be the best all-around skier, Pinturault was runner-up in the past two seasons. He also had three third-place finishes when now-retired Austrian great Marcel Hirscher was winning a record eight straight titles from 2012 to 2019.

A 34th career win in World Cup races lifted Pinturault out of a tie with Bode Miller and into eighth place on the men’s all-time list.