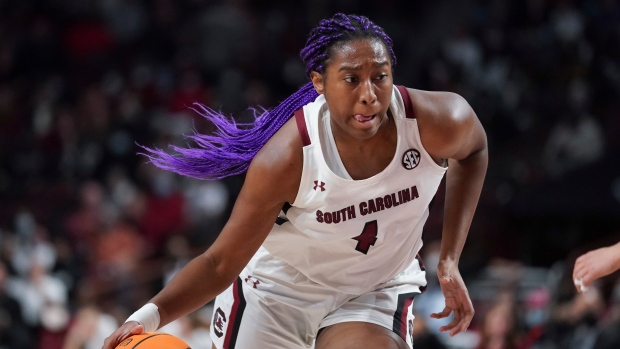 COLUMBIA, S.C. (AP) — No. 1 South Carolina added another milestone to what’s shaping up as a truly special season — the biggest comeback in program history.

The Gamecocks rallied from 18 points down to beat defending national champion Stanford 65-61 and keep their perfect, 12-0 start alive.

Aliyah Boston had 18 points, including the go-ahead basket with 1:05 left for South Carolina’s second victory this season over a No. 2 team and fifth over a Top-10 opponent.

“It shows our power,” Destanni Henderson, who scored 17 points and returned to the starting lineup after missing the past three games due to injury. “It’s hard to compete with us.”

Especially in the second half when the speedy Henderson and tall, athletic Boston got going. Still down 45-28 when Hannah Jump nailed a 3-pointer to start the third quarter, the Gamecocks took off on a 22-4 burst that put them ahead 50-49 entering the final period.

Boston’s final basket proved decisive and was a bit of redemption after she missed a short one in the final seconds of Stanford’s 66-65 victory over the Gamecocks in the national semifinals.

Boston overcame a slow start, adding five blocks and dominating down low in the second half. It was her fifth straight double-double and 36th of her career.

“Aliyah is Aliyah,” South Carolina coach Dawn Staley said. “This is what she’s been doing.”

And beating all comers is what the Gamecocks have done in the first third of their season. They’ve notched wins over North Carolina State, Oregon, UConn and Maryland before toppling Stanford.

Stanford (8-3) had a chance to go in front, but Cameron Brink’s jumper came off the rim and into the capable hands of Boston.

Boston hit a foul shot and Destiny Littleton followed with two more with 0.8 seconds left to close out the win.

It was a complete reversal for the Cardinal, who seemed to pull off a Southern double after winning at No. 7 Tennessee last weekend.

Stanford coach Tara Vanderveer believes the trip will prove beneficial to her team, no matter the disappointment in this one.

“We’ll get better,” she said. “It’s good this way now instead of this being your NCAA (tournament) game and your done. We can learn and get better.”

Brink, Stanford’s leading scorer at 14.2 points a game coming in, was held in check by the Gamecocks and finished with three points on 1-of-7 shooting.

Lexie Hull led Stanford with 17 points, just three of those coming in the final three quarters.

South Carolina had been waiting for this one since the last Final Four, Brea Beal and Boston missing two short cracks at the basket.

But it was Stanford who came out quickly. Lexie Hull scored 14 points on a pair of 3-pointers in the opening quarter and the Cardinal kept up the barrage from outside.

Hull’s sister Lacie started the second period with a 3-pointer. Jump and Anna Wilson added long-range baskets. By the time Haley Jones got free for a layup, Stanford was up 34-16 in front of a stunned, mostly full house of South Carolina fans.

Stanford had the perfect formula for defeating South Carolina: Make most of your shots and push Boston away from the basket.

South Carolina’s pressure took its toll on Stanford, who committed 20 turnovers, 12 of those in the final two periods.