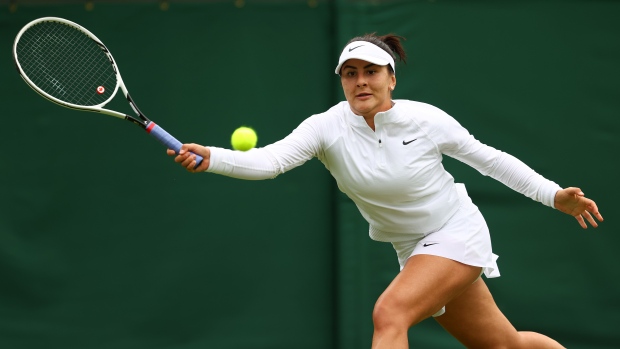 LONDON — Bianca Andreescu made an early exit from Wimbledon, while Denis Shapovalov is heading to the third round at the grass-court Grand Slam for the first time in his career.

Andreescu, the women's fifth seed from Mississauga, Ont., was defeated 6-2, 6-1 Wednesday in her first round match against France's Alizé Cornet.

"I obviously kind of stayed at the level I started the match, but she raised it," Andreescu said. "I don't know. I felt like I obviously could have raised my level a bit more, but during the match I felt like I couldn't.

"I tried to stay positive the whole match. But honestly, she played really well. She was taking control from the start. She served better today than in our last match too."

Rain in London has led to slippery playing surfaces at Wimbledon.

"Well, I don't think it affected my game, but, I mean, those points I think I lost -- I maybe won one point out of the six or how many times I slipped," Andreescu said of the conditions.

"The courts are super slippery. I spoke to a couple other players, and they said it's not that normal, but this is something we can't really control."

Shapovalov, the men's 10th seed from Richmond Hill, Ont., advanced to the third round via walkover when his opponent, Spain's Pablo Andujar, withdrew. Next up for Shapovalov is the winner of a match between wild-card Andy Murray of Britain, a two-time Wimbledon champion, and German qualifier Oscar Otte.

Vasek Pospisil of Vancouver took on Frances Tiafoe of the United States in a men's second-round match later Wednesday.