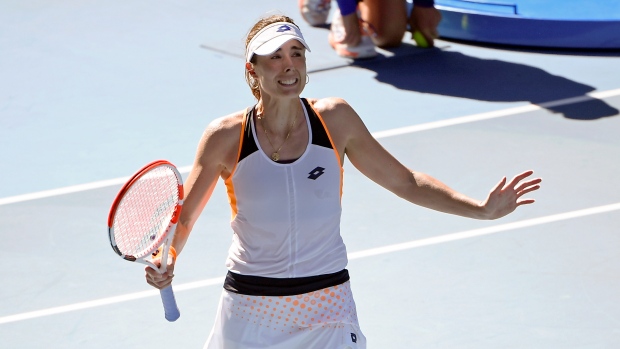 Alize Cornet survived a second-set meltdown to advance to her first Grand Slam quarterfinal after 63 main-draw appearances with a 6-4, 3-6, 6-4 win over Simona Halep.

Cornet led by a set and 3-1 before losing five consecutive games and 16 straight points to send the match to a decider.

Halep saved two match points on her serve in the ninth game before Cornet clinched the match in the 10th. She dropped to her knees and clasped her hands together as she looked up to her support team when Halep netted a return.

Cornet had a 3-1 lead in their head-to-head meetings and improved on that record in the Rod Laver Arena fourth-rounder. Cornet will next play Danielle Collins, who beat Elise Mertens on the same court in the opening match of the day 4-6, 6-4, 6-4.

Cornet made her Grand Slam singles debut as a wild-card entry at the 2005 French Open. She is the first French woman to reach an Australian Open quarterfinal since Marion Bartoli in 2009.

Halep won the French Open in 2018 and Wimbledon in 2019. She lost the 2018 Australian Open final to Caroline Wozniacki.