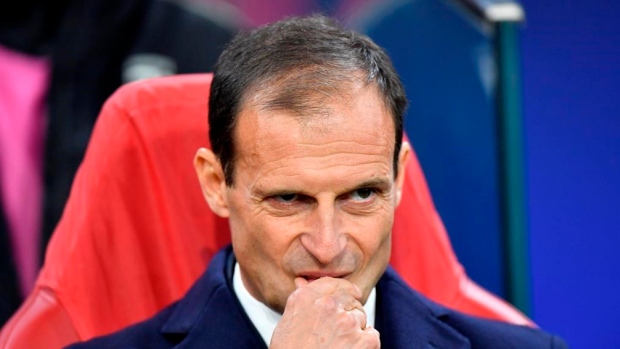 TURIN, Italy — Massimiliano Allegri admitted on Saturday that it was Juventus which decided he would not coach the club next season, despite leading it to a record-extending eighth straight Serie A title.

Allegri's contract as Juventus coach was scheduled to expire at the end of next season but the club announced on Friday they were set to part ways. That fueled speculation Juventus is preparing to rehire former manager Antonio Conte.

"I thank the president, I thank the players, we've had a lot of joy, I leave a winning team which has the potential to have another great Champions League season," Allegri said at a news conference on Saturday.

The 51-year-old Allegri had tears in his eyes as he looked at the Juventus players, who were all sat in the first few rows.

"When I met with the club I expressed my opinion on what could be good for Juventus in the future and the club made their evaluations, deciding that the coach would not be me anymore.

"I didn't even ask the club for anything. I understood first that psychologically we had to separate."

Juventus president Andrea Agnelli was sat next to Allegri at the news conference and he presented the coach with a jersey with the words "History Alone" and No. 5 on the back, to represent the five Serie A titles Allegri won with Juventus.

Allegri won 11 trophies with Juventus since replacing Conte in 2014 and also led the team to two Champions League finals.

Juventus appears frustrated by not being able to win the top European trophy under Allegri — especially after signing Cristiano Ronaldo from Real Madrid before this season.

Juventus was eliminated by Ajax in the quarterfinals a month ago.

Allegri's final two matches with Juventus will be against Atalanta on Sunday in Turin — when the team will be presented with the Serie A trophy — and at Sampdoria the following weekend.

"We have to celebrate (Sunday) because these last five years have been absolutely wonderful," Allegri said.

Conte led Juventus to the first three titles of the club's current run, then left to coach Italy through the 2016 European Championship. He coached Chelsea to the English Premier League title in 2017 but was fired by the London club in 2018 and has been without a club since.

"At the end of several reflections and analysis, we identified that this was the best decision to make," Agnelli said of Allegri's departure. "However, it was also the most difficult I had to make during my time at Juventus."

"This was the right time to close this extraordinary cycle. We must be able to make the right decision and make them in the right moment. Only the future will tell us if these decisions are the right ones. I do want to hear strong opinions and once those opinions have been made to me, I have a decision to make."