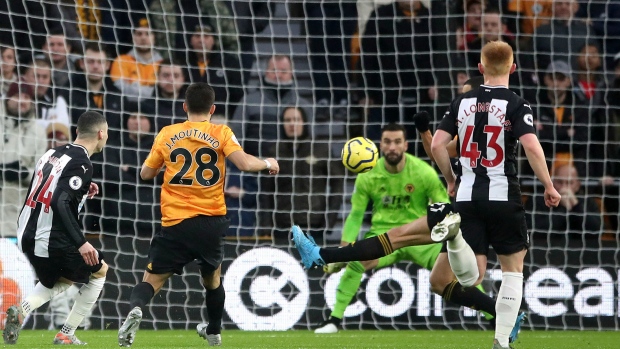 WOLVERHAMPTON, England — Miguel Almiron scored early for the visitors as Newcastle drew 1-1 at Wolverhampton in the English Premier League on Saturday.

A flowing move on the right saw Jetro Willems wriggle clear and Dwight Gayle teed up Almiron to fire high past Rui Patricio from 15 yards (meters) in the seventh minute.

It was the Paraguay international's third goal in his last six games after taking almost a year to net his first for the Magpies in December.

Leander Dendoncker quickly cancelled out Almiron's opener at Molineux, running in unchecked to volley in Joao Moutinho's delivery in the 14th, to leave Wolves three points behind fifth-place Manchester United.

It was a gritty display from Newcastle, six points clear of the bottom three, but its injury problems got even worse after losing Paul Dummett and Dwight Gayle.