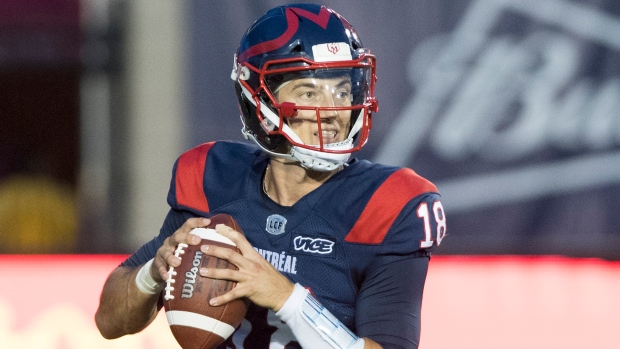 MONTREAL — Head coach Khari Jones says his Montreal Alouettes are exactly where they want to be: playing for first place in the CFL East at Percival Molson Stadium on a Friday night.

A win over the rival Argonauts on Friday would put the Alouettes ahead of Toronto at the top of the division. A rare occurrence in the CFL, both teams are looking to extend three-game winning streaks.

“I think the guys are really excited about it, I want them to be excited about it. You want to be in these types of situations,” said Jones. “It’s a good thing. When your team is progressing and going at different levels, you need some games like this to test yourself and see where you’re at.”

Quarterback Matthew Shiltz will start a second straight game for Montreal (5-4). Filling in for the injured Vernon Adams Jr., Shiltz picked up his first CFL win last week against the Ottawa Redblacks.

“My mentality, from even back when I was backing up Vernon, is just staying ready and if I’m called upon to go win football games,” Shiltz said. “That mentality is the same whether I’m No. 1 on the depth chart, No. 2 or whether I’m on the practice roster.

“I’m going to keep preparing as a starter, keep leading, keep going out there to win football games until I’m told that it’s not my job anymore.”

Shiltz added that the Alouettes are "a hungry group" that understands what the opportunity to fight for the top spot in the conference represents. For him, playing Toronto is a great first test as Montreal gets ready to take on the top two teams in the Western Conference, the Saskatchewan Roughriders and Winnipeg Blue Bombers twice, in the following three weeks.

"We’re excited but at the same time there's not one guy in the locker-room that's content with what we have done right now or where we’re at right now," Shiltz said. "If you ask me, I still don't think we're playing our best football as a team so there's still a lot more to give and I think guys in the locker-room see it that way too."

The Argonauts (6-3) will also bring a three-game winning streak to Percival Molson Stadium. Before heading into a bye week, Toronto scored 19 points in the fourth quarter to beat the Hamilton Tiger-Cats in a 24-23 thriller on the road.

"We gotta use this momentum. We got another tough one this week," Argos head coach Ryan Dinwiddie said. "Just to go out in Hamilton and win on the road, we haven't done that in I don't know how long so we have another tough challenge in Montreal as well."

Toronto will not look down on the Alouettes even with Shiltz leading the offence. For Dinwiddie, Friday's game could be a tricky affair as the Argonauts try to push for an even 3-3 away record.

"Just when Montreal feels like they’re out of it, they come back and start winning games," Dinwiddie said. "We know it's going to be a great environment, we're going to have to handle some crowd noise and go in there and get a win on the road which is tough to do."

Leading the way for Toronto will be quarterback McLeod Bethel-Thompson. The 33 year-old has thrown for 1,314 yards and racked up nine touchdowns passes so far this season. Dinwiddie thought that Bethel-Thompson improved significantly since bringing him back as the starting quarterback in late September.

"I just think he's really grown into the system lately," Dinwiddie said. "The first day we brought him back five weeks ago, the ball was jumping out of his hands, his reads were clean, he was anticipating, so I see that growth there. He's got two interceptions but they've been on two-point plays, in my opinion he hasn’t thrown a pick all season."

CUNNINGHAM OUT: The Alouettes have added wide receiver B.J. Cunningham to the six-game injury list following a finger injury sustained during Thursday's practice session. Reggie White Jr. will take his place Friday night. The former Monmouth University player set a school record 1,133 receiving yards in 2018 and featured in the 2019 NFL pre-season for the New York Giants.

FLU BUG: The Alouettes went through a wave of non-COVID related illness during the week. Offensive lineman Tony Washington, linebacker Chris Ackie as well as running backs Cameron Artis-Payne and Jeshrun Antwi all missed practice sessions this week. Artis-Payne will not be suiting up Friday night.

MUAMBA RETURNS: Argos linebacker Henoc Muamba will make his return to Percival Molson Stadium on Friday night. Muamba, who returns to the lineup after missing the last three games, was named the Alouettes most outstanding Canadian and most outstanding defensive player back in 2019. Muamba needs 10 defensive tackles to reach the 500 career mark.

BEDE’S 90TH: Argos kicker Boris Bede will also return to his former home of Montreal and will celebrate his 90th CFL game by the same token. The Frenchman completed 14 of his 18 field goal attempts this season.