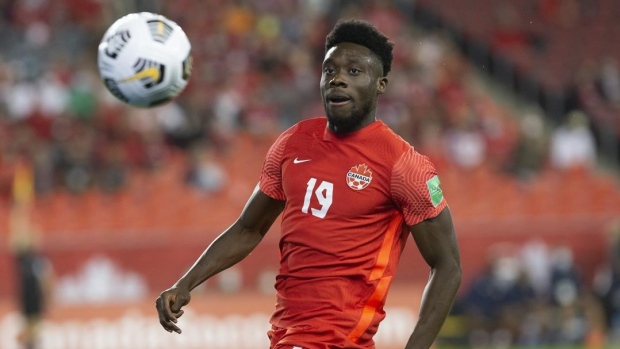 There is also a place in coach John Herdman's 25-man squad for fullback/wingback Raheem Edwards, who has been in fine form with the Los Angeles Galaxy this season. The 26-year-old Edwards, who has four caps for Canada, last played for the national team in March 2018 — a 1-0 win over New Zealand in Spain in Herdman's debut as coach.

Edwards is tied for the MLS lead with three game-winning assists this season and has five assists in total.

And there is a first senior call-up for 17-year-old forward Luca Koleosho, who made his La Liga debut in Spain for RCD Espanyol de Barcelona in the May 22 season finale against Granada CF.

Koleosho was also named on Canada's recently released provisional roster for the CONCACAF U-20 Championship. Born in the U.S. with an Italian-Canadian mother, he moved to Spain when he was 11.

Canada, currently ranked 38th in the world, opens the June FIFA window with a friendly against No. 21 Iran on June 5 at B.C. Place Stadium before kicking off its CONCACAF Nations League campaign four days later against No. 79 Curaçao at the same venue. The Canadians then continue Nations League play against No. 82 Honduras in San Pedro Sula on June 13.

The matches are the first for Herdman's team since it wrapped up CONCACAF World Cup qualifying on March 30 in Panama.

“These are three opportunities to take steps forward with this group of players in preparation for the FIFA World Cup in Qatar,” Herdman said in a statement Wednesday. “Every minute together is crucial as we prepare to work collectively to give us the best chance to perform against some of the world’s best on the biggest stage.”

“There isn’t a minute that can be wasted in this moment. Our group of players that competed across 20 matches as part of FIFA World Cup qualifiers created a foundation of trust, belief, and confidence in each other, so bringing them together and continuing to find that next level will be key to our success in Qatar.”

The Canadian men went 4-2-0 in World Cup qualifying without Davies, booking their ticket to the soccer showcase for the first time since 1986. Canada topped the final round of qualifying in North and Central America and the Caribbean at 8-2-4, posting a 14-2-4 record across three rounds of qualifying while outscoring its oppositions 54-8.

The Iran friendly has come under fire since it was announced.

At issue is whether Canada should be hosting Iran given the Canadians who died on Ukraine International Airlines Flight 752 when it was shot down on Jan. 8, 2020, minutes after taking off from Tehran, by an Iranian surface-to-air missile. The Canadian government says 55 Canadian citizens and 30 permanent residents were among the 176 people killed.

Hamed Esmaeilion, spokesperson for the Association of Families of Flight PS752 Victims, says his group has been against the match since it was first rumoured. Prime Minister Justin Trudeau has spoken out against the game and said this week that it will be up to the Canada Border Services Agency to decide whether the Iran team is allowed into the country.

Canada Soccer has had little to say about the controversy, no doubt hoping it goes away so it can benefit from the box office of a home match while offering Herdman's team a rare non-CONCACAF test.

"There are some areas in the team that we would like to strengthen prior to Qatar,” said Herdman. “We are looking to assess specific profiles of players that can contribute to our tactical approach against Tier 1 opponents."

The roster features 10 MLS players including Alistair Johnston and Kamal Miller from CF Montreal, Lucas Cavallini from the Vancouver Whitecaps and Toronto's Osorio.

Following the World Cup later this year in Qatar, Canada will continue Nations League play in March 2023, hosting Honduras and playing at Curaçao.

The top two teams in Canada’s Nations League A group will qualify for the 2023 Gold Cup while the last-place team will be relegated to CONCACAF Nations League B and further qualification matches to get to the Gold Cup.

The 23-year-old Brym, who plays in the Dutch second tier for FC Eindhoven, won his sixth cap for Canada last November in a 4-1 win over Panama in World Cup qualifying play.

This report by The Canadian Press was first published May 25, 2022