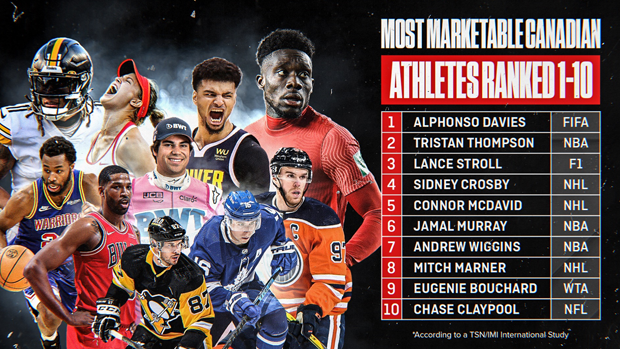 Bayern Munich left back Alphonso Davies is Canada’s most marketable active athlete, according to a TSN/IMI International study.

The 21-year-old Davies, who has a backstory that would inspire Hollywood and skills that make him among the best soccer players on the planet, placed ahead of Canadian NBA stars, Formula One driver Lance Stroll, and the NHL’s Sidney Crosby and Connor McDavid.

"Alphonso's story is so great," said Nick Huoseh, Davies’ Edmonton-based agent. "Born in a refugee camp and his family comes and settles in Canada. But also, Alphonso is a really interesting guy. People resonate to him. He's funny to be around and he’s a good entertainer."

Reactions don’t get much better than this!

Tennis player Eugenie Bouchard was the ninth most marketable Canadian athlete and top female in the global survey. Bouchard was among 13 women in the top 50.

Based in Toronto, IMI International works with companies to evaluate the effectiveness of corporate sponsorships in the sports, music and other industries.

IMI International's survey, believed to be the first of its kind, examined how aware respondents around the world were of active Canadian athletes, their likeability, and whether respondents would want to meet the athletes and support the brands they endorse. The survey also explored professional athletes’ level of engagement on social media platforms, as well as how many Internet searches were done for each athlete.

IMI International purchased consumer information from Dynata, a global data and survey firm, and then canvassed more than 112,000 respondents in 150 countries across North America, Europe and Asia. The survey was conducted between September through November 2021.

"It's one of the largest surveys we have ever done," said Don Mayo, IMI International's managing partner. "One aspect that surprised me was how much diversity there is, how many athletes from different sports were represented."

Each survey respondent answered 14 questions about one particular athlete.

The survey showed a stark divide between the marketability of Canadian athletes at home and abroad.

While Davies is Canada’s most globally marketable athlete, he ranked 16th within Canada.

Of the top 50 most marketable active Canadian athletes globally, 17 were NHL players, six were soccer players, five were in the NBA and five play professional tennis in either the ATP or WTA.

Golf and the Olympics accounted for four marketable athletes apiece.

The study discounted the number of followers athletes had on social media platforms such as Twitter, TikTok and Instagram.

“Social media followers are not great indicators of ‘marketability’ as a very low percentage [of followers] are active and some platforms are not optimal to be used for products and services by athletes,” the study reported.

Several player agents who do not have first-hand knowledge of Davies’ Nike contract, which was signed when he played with Vancouver in Major League Soccer, said they expect he probably is paid $100,000 to $200,000 a year.

Davies signed a three-year endorsement deal with Red Bull in 2017 after becoming enamored with the brand because Brazilian soccer star Neymar was pitching the energy drink. Trouble was, Davies didn't drink Red Bull. His morning routine when he's in Canada includes stopping at Tim Hortons on the way to training and ordering a hot chocolate and a bagel.

"The Red Bull guys saw him posting this on social media and were like, 'Why isn't he drinking Red Bull?'" Huoseh said.

Huoseh said he expects to begin talking with international brands about Davies in the coming months, but adds global endorsement deals are also tricky.

Audi is a part owner of Bayern Munich, which limits its players' ability to strike a deal with a competitor like Mercedes-Benz. Coca-Cola’s sponsorship of the juggernaut German soccer club makes it tough to do endorsements with rivals such as Pepsi.

"It's also important not to have too many deals," Huoseh said. "Each deal means more of a commitment with filming and other obligations. Over the past five years playing for Bayern, with his commitment to Canada Soccer, Phonsie has never had more than two weeks off at a time. It can be exhausting."

Jim Kozak, a sports marketing executive with MediaCom Sport & Entertainment in Toronto, said the business of athlete sponsorships is evolving.

For decades, athletes who signed endorsement contracts were featured in 30-second television spots and in print and outdoor ads. But digital marketing is now the bedrock of most deals. Ads can be as short as five to 10 seconds.

The public also has a misperception over how much money is paid to athletes for endorsement deals, Kozak said.

Many Canadian athletes who sign deals are getting between $50,000 and $100,000 per year, he said. It's rare that they receive more than that.

Davies’ five-year endorsement contract with Nike Canada expires at the end of 2022 and the two sides have discussed a new contract, Huoseh said. He declined to say how much Davies is paid by the company or what he would be looking for in a new contract.

One complicating factor may be Davies’ health.

Bayern Munich on Jan. 14 announced Davies had been diagnosed with myocarditis, an inflammation of the heart muscle. Davies, who is fully vaccinated, tested positive for COVID-19 on Jan. 4.

It’s unclear how much playing time Davies might miss and how that might affect his current endorsement contracts.

"I don't expect Alphonso being sidelined for a few months will have any impact on endorsements," Huoseh said. "This is not a life-threatening or career-ending. We know he's coming back."

With Canada Soccer guaranteed a spot in the 2026 World Cup, and on the cusp of qualifying for this year’s World Cup in Qatar, Davies’ profile is likely about to skyrocket even higher, the agents said.

"The top soccer players in the world are being paid as much as $20 million a year from companies like Nike," said Courtney James, a Toronto-based player agent whose clients have included Canadian men's national team players Julian de Guzman and Samuel Piette.

James said Nike competitors Puma, Under Armour, and Adidas would all love to have a partnership with Davies and sell him the idea of creating his own line of apparel and cleats.

Davies should garner as much as $5 million a year from his next shoe deal, whether it's with Nike or another athletic footwear and apparel company, James said.

"Even though Alphonso gets their product for free, he's still paying for Nike shoes," he said. "If you're a global brand like Nike, what better endorsement could you ask for?