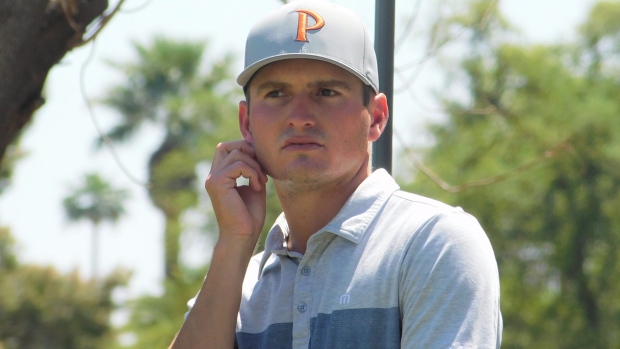 LITCHFIELD PARK, Arizona—In a professional event that will determine players’ futures, it was a pair of amateurs who ended up battling well into the afternoon at The Wigwam’s Gold Course, host of the Mackenzie Tour – PGA TOUR Canada Qualifying Tournament. Pepperdine’s Clay Feagler and Arizona State’s Blake Wagoner finished at 12-under after 72 holes, with the duo going to a sudden-death playoff. There, Feagler prevailed, earning medalist honors and full Mackenzie Tour status for the entire 2021 season. Wagoner, along with the other top-five finishers behind Feagler, will be fully exempt through essentially the season’s first half.

Besides the amateurs, others to earn status were Samuel Saunders and Tee-K Kelly (11-under), Daniel Hudson and Canada’s Wil Bateman (10-under). Just missing finishing among that group was third-round co-leader Jon Trasamar, who shot a final-round, 4-over 76 and dropped into seventh place. He will be conditionally exempt this season.

In the overtime session, at the Gold Course’s par-5 first hole, Feagler hit his approach shot onto the green in two, while Wagoner knocked his ball into the greenside bunker. Feagler faced a 25-foot eagle putt, while Wagoner had a 13-footer for birdie after blasting out of the sand. Feagler lagged to about 18 inches, and when Wagoner couldn’t sink his putt, Feagler routinely tapped in for the title.

“It's crazy. It is a final round. I was nervous. I’m not going to lie,” said the Pepperdine senior. “Before the round I wasn’t feeling great. I came out here and had a good range session. I thought, If I can keep hitting the ball like that, I felt like I had a good chance. I just needed to get the putter going. These last rounds at Q-School can get very nerve-wracking.”

That played out on the 18th hole of regulation, Wagoner one group ahead of Feagler.

After hitting his second-shot approach into a canal bordering the 18th green, Wagoner took a penalty drop and putted to about 18 inches from 50 feet. From there, facing a bogey putt, he missed, settling for double bogey, to fall to 12-under and, eventually, into the playoff.

“I didn’t know that at the time,” Wagoner said of his short miss that ultimately would have won him the tournament had he made it. “I didn’t think I would be in contention to win. I just decelerated and had one of those brain farts coming down the stretch.” He still managed a smile knowing he will be in action once the Mackenzie Tour season begins later this year.

Feagler turned the 18th hole in regulation into the turning point of the tournament. After a solid drive that landed in the middle of the fairway, he hit a 9-iron approach to about 18 feet, left of the pin.

“Basically, I was just telling myself, ‘Don’t hit it in the canal. Hit it somewhere on grass and give yourself a chance for birdie,” Feagler said of his approach. “I saw a little right to left. The grain was going that way. I told myself to just get it there. I had left everything short today. I don’t know if I was nervous. I just couldn’t get the ball to the hole, and I was making sure I didn’t three-putt. I’m really comfortable with right to left. I saw a good line, I hit it and it went in the hole.

“It’s good knowing I have job security this summer,” Feagler continued. “I thought I was going to get some status. I didn’t know it was going to be full. I just knew I had to make a good putt on it. If it goes in, great. Crazy how things unfold.”

The Mackenzie Tour’s sixth Qualifying Tournament will be at Callway Gardens in Pine Mountain, Georgia, beginning this Tuesday, April 6.