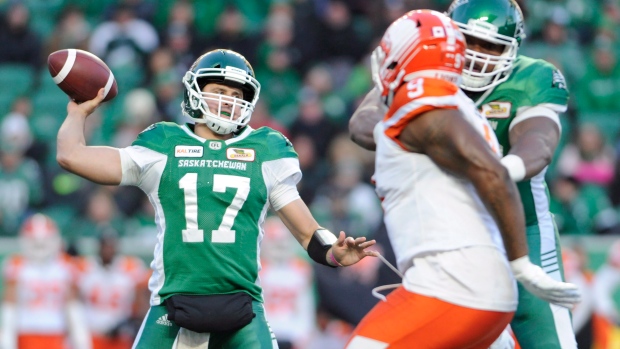 Canadian Football League commissioner Randy Ambrosie has taken the unusual step of apologizing to his Board of Governors and the fans over game officials and a concussion spotter failing to recognize the head injury sustained by Saskatchewan quarterback Zach Collaros on Saturday against the B.C. Lions.

Instead of a flag being thrown on the play and a concussion spotter removing a dazed Collaros from the game, the pivot was allowed to remain in for two more plays before coming to the sideline after Saskatchewan scored a touchdown.

At that point he was evaluated by Saskatchewan’s medical staff and did not return to the game.

“I sent a note to the governors and I basically apologized to the governors that we didn’t handle our business this weekend as well as I want us to and need us to,” Ambrosie said Monday evening. “And I set in place, in a detailed note to them, the things we’re going to do to remediate these issues.”

Ambrosie said the league had already been concerned with instances of quarterbacks taking blows to the head where no flag was thrown and had been working to address that situation before the Collaros hit.

“I recognize we’re doing some work on the way we position the officials on the field to try and create better sightlines,” he said. “We’re going to tell our officials, 'look we’ve got to err on the side of caution when it comes to those violent collisions and when in doubt, let’s protect the players in all things' ... that message will go out to the officials this week.”

The CFL has five concussion spotters whose job it is to watch for players who may be suffering the effects of a blow to the head. They have the ability to order any player out of the game for evaluation. But despite Collaros taking a massive blow, remaining on the ground and then crouching down several more times after coming to his feet, no order to remove him was given.

“The game should have been stopped and (Collaros) should have been taken off the field for evaluation so we’re going to spend time this week talking with the spotters and make sure they understand that their job is to keep the players safe,” Ambrosie said.

The league did not acknowledge its mistakes before Sunday night when it was reported by TSN’s Farhan Lalji via Twitter.

Late on Monday afternoon, a letter of apology from Ambrosie to the fans was posted on the league’s website.

“Frankly I thought it took us too long to address the issues. For reasons that I tried to correct today we had a bit of a slow response ... I think we need to be more responsive to the fans,” Ambrosie said. “The fans and the media should have known right away that we had made a couple of mistakes and own up to them because I think that’s the way we’re going to build integrity with the media and with our fans.”