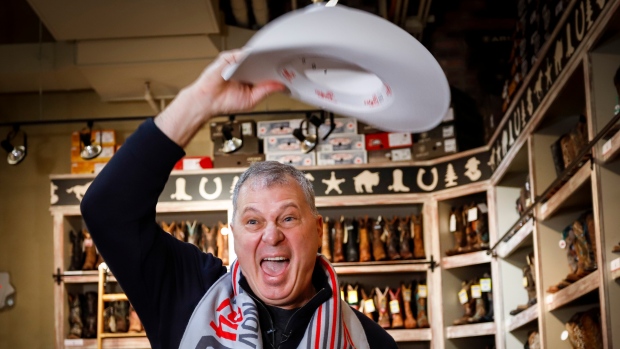 Being commissioner of the Canadian Football League has always required a certain degree of optimism, which has never been a problem for Randy Ambrosie.

When he steps onto the stage for his annual state-of-the-league address Friday morning in advance of Sunday’s 107th Grey Cup game in Calgary, he will boldly present his vision of a league excited about its future – excited about the prospect of expansion to Atlantic Canada, of forthcoming new ownership in Montreal, of a new long-term agreement with its television partner and the integration of players from around the globe.

He will talk about efforts to reach out to new Canadians, of one day playing CFL games abroad and turning the league into a global hub for the sport of football.

Ambrosie is the first commissioner in a generation who has pledged to turn the CFL into something else, rather than simply trying to grow the league from its traditional business model and revenue streams.

After promising the governors he would double league revenues, Ambrosie calls his operating style “perform while you transform.”

That’s another way of saying he has to manage the league’s traditional challenges while trying to march boldly into the future as quickly as he can.

“We want to step on the gas and grow the league,” Ambrosie said this week. “But we didn’t do as much in 2019 as we would have liked to have done. This year we had more ‘have-to-dos,’ but we’re doing everything you have to do to get towards those audacious goals … the future is incredibly bright.”

Two significant challenges have taken up a lot of the league’s time and energy over the past year, the first being the new collective bargaining agreement negotiated during the off-season. The other is the league being forced to take over ownership of the Alouettes and embarking on a still-not-completed effort to put the team in new hands.

That said, it’s not like the league has been stuck in neutral over the past 12 months.

Since Ambrosie’s last state-of-the-league address, the CFL has held a combine in Mexico City, established working partnerships with football federations around the world and introduced the first wave of global players. It’s an effort that will be stepped up this off-season with the recent hiring of a director of global scouting and a series of winter combines scheduled across Europe.

“Get used to this expression,” Ambrosie said. “We are the biggest global football league in the world.”

Behind the scenes, Ambrosie has worked to transform he league’s culture from one where every stakeholder looks after its own interests to one where there are incentives to help grow and sell the league.

“We have to get together, lock arms and tell the story of our game,” he said.

Montreal still doesn’t have an owner, despite assurances during the season that the matter would be put to bed well before November.

Fan bases in the league’s two biggest English markets – Toronto and Vancouver – remain soft, with problems running much deeper than the struggles on the field. Younger fans in the big cities remain often out of reach.

Meanwhile, the momentum towards Atlantic expansion seems to have slowed in recent months, with an upcoming December vote in Halifax that could either breathe new life into the project or kill it altogether.

And there remains the fact that the CFL’s fan base still looks a lot like it did in the 1950s. Check out the Grey Cup parties this week in Calgary and you’re likely to find far less diversity than among fan bases of sports like soccer, basketball and baseball in this country – another area the commissioner has promised to tackle.

“If you don’t [reach new Canadians], you’re doing that at your peril,” he said.

What you have right now is a league with a lot of things happening at or just below the surface – ideas that have turned to action under a commissioner still not three years on the job. Ambrosie is convinced it’s the kind of action required if the league is to thrive in the future.

“I’m not going to apologize for being the salesman-in-chief for this league,” he said “I love this league and I believe in its future.”