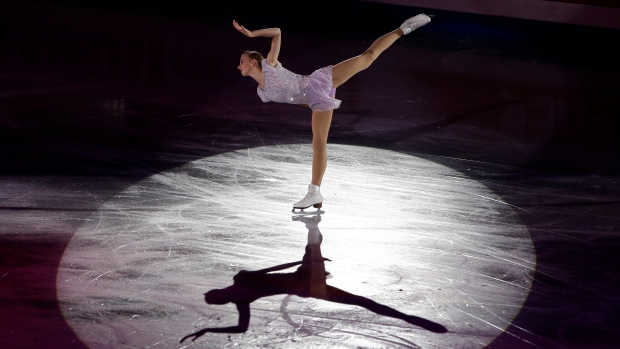 Edmunds, who came into the free skate in fourth place, hit the wrong edge on an early combination, a triple flip-single loop-triple Salchow, but landed most of her other big jumps, including a late combination. Skating to "Tinker Bell" by James Newton Howard, the 16-year-old finished with 184.02 points.

The Four Continents provides an important gauge of possible competition at next month's world championships in Shanghai, but it doesn't include powerful European skaters. The absent Russians who swept the medals at the European championships earlier this month, however, were on the minds of many.

Satoko Miyahara of Japan, who'd been first after the short program, had an uneven free skate, including a fall on a triple Lutz, to win silver, with 181.59 points. The 16-year-old skated to "Miss Saigon" by Claude-Michel Schoenberg.

"I know the Russian girls are so strong," Miyahara said, "but I don't like to think about other people. I just want to focus on myself."

She blamed her shaky free skate on a lack of speed and power on her jumps.

The Russians will be a focus of worlds. They include Elizaveta Tuktamysheva, who won gold at the European championships, and Elena Radionova and Anna Pogorilaya, who were second and third, respectively.

Russian Olympic champion Adelina Sotnikova, who has had an ankle injury, hasn't skated in international competition since beating South Korea's Yuna Kim for gold at Sochi in February 2014, in a victory that caused heated debate over the judging.

Kim has retired, but reminders of still-fresh South Korean outrage at her loss were everywhere at the arena. "ISU out," said one sign, a reference to the International Skating Union that governs the sport. Another said "Robbers Sochi," and one, also directed at ISU, read: "I know what you did last winter in Sochi."

Other skating highlights at the championships at Seoul's Mokdong Ice Arena included Olympic bronze medallist Denis Ten's commanding win at the men's event Saturday. The Kazakh skater finished well ahead of Joshua Farris of the United States in second place.