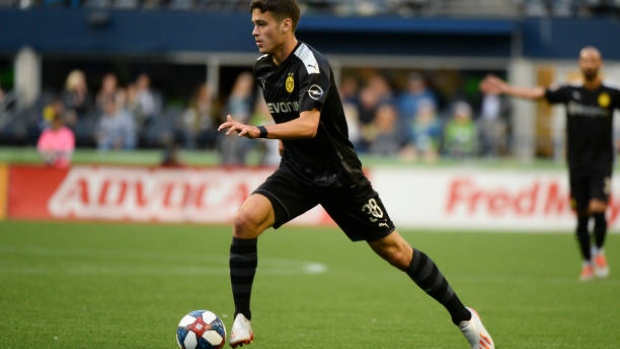 The 17-year-old Reyna played a one-two with Jude Bellingham, also 17, and fired past Gladbach ’keeper Yann Sommer in the 35th minute.

“We’ve a lot of young guys and a great balance of old guys, too. It was a really exciting game,” Reyna said.

Some 9,300 fans attended the game — the first time Dortmund has had supporters since coronavirus restrictions began in March.

“It’s great to have fans back and to score makes it even better," Reyna told Sky TV. "A great start,”

It was Reyna’s first goal in his 16th league appearance for Dortmund. He made his debut as a substitute against Augsburg on Jan. 18, when he became the youngest American to play in the Bundesliga, aged 17 years, 2 months, 5 days.

Bellingham joined from Birmingham in the off-season to add to an already young roster including 20-year-olds Jadon Sancho and Erling Haaland. Reyna is thrilled with Bellingham's arrival.

“It’s so fun to play with guys that are similar to my age ... It’s a lot of energy and a lot of excitement for us, and for the fans to watch," Reyna said. “It’s an exciting group. We just have to kick on and keep working.”

Dortmund signed the attacking midfielder from New York City FC in July 2019. He went on to score four goals in 11 league games for the club’s under-19 team.

Haaland scored Dortmund's other goals in the second half — the first from a penalty won by Reyna.

“I think I’m ready to take on a bigger role,” he said. “It’s gonna be a tough season with a lot of games. So any way I can help the team, score goals and get assists. I think that’s mainly how I can help.”