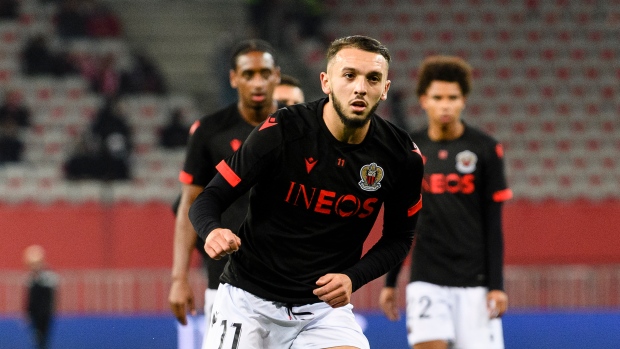 PARIS (AP) — Amine Gouiri scored with a Panenka penalty kick and delivered an assist on Sunday as Nice moved back to second place in the French league with a 2-0 win at Metz.

The result extended Nice's winning run to five league matches and lifted the team to within eight points of leader Paris Saint-Germain. Nice has a two-point lead over third-place Marseille, which won 2-0 at Lens on Saturday.

The 21-year-old Gouiri started the match in place of striker Andy Delort — who was ruled out shortly before kickoff due to illness — and delivered an outstanding performance.

Metz goalkeeper Marc-Aurele Caillard kept the hosts afloat in the first half as Gouiri tested him several times. The French forward finally found a breakthrough in the 58th minute with a clever lofted ball over the defense for Khephren Thuram, who broke the deadlock from close range.

Gouiri, a France U21 international, thought he had doubled Nice's lead in the 76th but his effort from Evann Guessand's assist was ruled out for offside.

Nice was awarded a soft penalty with five minutes left after slight contact between Guessand and Vincent Pajot. Gouiri tried the audacious chipped kick and beat Caillard for his 10th goal this season, although the goalkeeper got a hand to the ball but could not stop it from crossing the line.

Gouiri joined Erling Haaland and Kylian Mbappe as the only players under the age of 23 to have scored at least 10 goals and registered 5 or more assists in one of Europe’s top five leagues this season.

Metz dropped to 18th in the relegation zone.

Following two straight losses in 2022, the win lifted Montpellier to sixth place, one point above Monaco.

Montpellier led 2-0 after 31 minutes with goals from Elye Wahi and Mavididi but could not hold onto its advantage. After Wissam Ben Yedder reduced the deficit, the visitors pressed hard throughout the second half and were rewarded with Vanderson's equalizer in the 81st minute.

Then came Mavididi's beauty, one minute into added time, at the conclusion of a move ignited by Nicolas Cozza. The defender surged near the midfield line to retrieve the ball and then slalomed through Monaco players toward the goal. Cozza released his pass inside the box and Mavididi unleashed an instant strike into the top corner.

Struggling Bordeaux ended a three-game losing streak by winning 4-3 in a dramatic contest against in-form Strasbourg.

The hosts led 3-0 before Kevin Gameiro scored twice. Hwang made it 4-2 in the last minute and Majeed Waris scored seven minutes into added time.

“Hwang had a perfect game, he bailed us out on several occasions," Bordeaux coach Vladimir Petkovic said.

Angers beat Troyes 2-1, Clermont came from behind to down Rennes 2-1 and Nantes defeated Lorient 4-2.