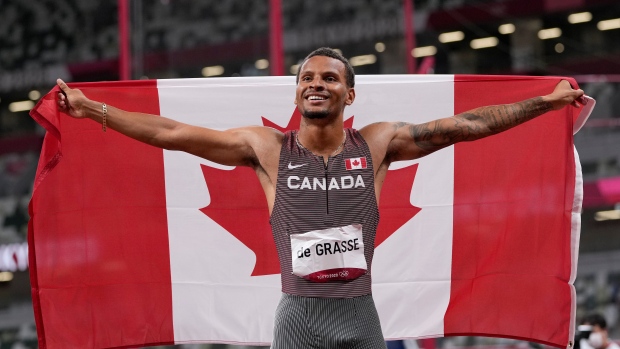 TOKYO — Canada's Andre De Grasse has raced to a gold medal in the men's 200 metres at the Tokyo Olympics.

De Grasse roared to the finish line in a Canadian-record time of 19.62 seconds.

Winning his fifth Olympic medal — and second in Tokyo after taking bronze in the 100 metres — De Grasse tied Phil Edwards for the most by a Canadian track and field athlete. Edwards captured five bronze medals between 1928 and 1936.

De Grasse's victory comes 25 years — plus a week — after Donovan Bailey raced to 100-metre gold at the 1996 Atlanta Olympics.

Gold was the one Olympic medal missing from De Grasse's collection. The 26-year-old from Markham, Ont., raced to bronze in the 100 metres on Monday in Tokyo, and captured a silver and two bronze in 2016 in Rio. He's raced to a silver and three bronze over the 2015 and '19 world championships.

Canada had two men in the 200-metre final for the first time since 1928, when Percy Williams took gold and teammate John Fitzpatrick finished fifth.

Brown, 29, was racing in his first individual Olympic final. He was on the 4x100 relay team with De Grasse that captured bronze in 2016 in Rio.