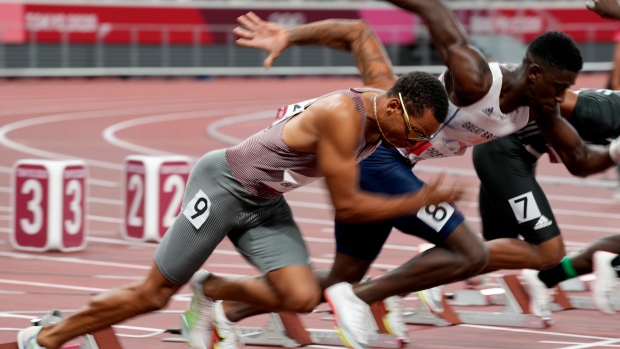 TOKYO — Canada's Andre De Grasse cruised into the semifinals of the men's 100 metres, winning his heat in a season-best time of 9.91 seconds in the fastest time on the night.

Wearing sunglasses and looking relaxed in the blocks, the 26-year-old from Markham, Ont., turned on the jets over the final 50 metres to book his spot in the next round.

Running out of Lane 9, De Grasse glanced to his left with 10 metres to go before sailing across the line. His fast time is just 0.01 off his personal best set at the 2019 world championships.

The Canadian record is 9.84, shared by Donovan Bailey and Bruny Surin.

Italy's Lamont Jacobs had the second fastest time of 9.94, while American Fred Kerley was third in 9.97.

The sprinters had to overcome a nervy start to the race after two false starts, the second of which led to the disqualification of Nigeria's Divine Oduduru.

Gavin Smellie of Brampton, Ont., finished eighth in his heat and did not advance.

The semifinals and final are Sunday.

De Grasse will also run the 200 in Tokyo, the distance in which he won silver in Rio in 2016 and at the world championships.

With the retirement of Jamaican superstar Usain Bolt, who has won the 100 and 200 in the past three Olympics, there's no sure favourite at either distance.

The 100 metres is a great example of how bizarre these Olympics are amid the global COVID-19 pandemic. Because of the state of emergency in Tokyo, no fans are permitted in the 50,000-seat stadium, which, because of its multi-coloured seats, looks better on TV than in person. Media, officials, coaches and athletes were the only people in the stadium.

The 100 is also normally a spectacular auditory experience -- the hush when the runners crouch in the blocks, followed by the eruption of cheers at the sound of the gun. It's deafening. But Saturday, the sound of the sprinters' shoes could be heard striking the track with each step.

Meanwhile, Canada's Crystal Emmanuel and Khamica Bingham were eliminated from the women's 100 semifinals earlier in the night.

Jamaica's Shelly-Ann Fraser-Pryce was the fastest qualifier in 10.73.

This report by The Canadian Press was first published July 31, 2021.