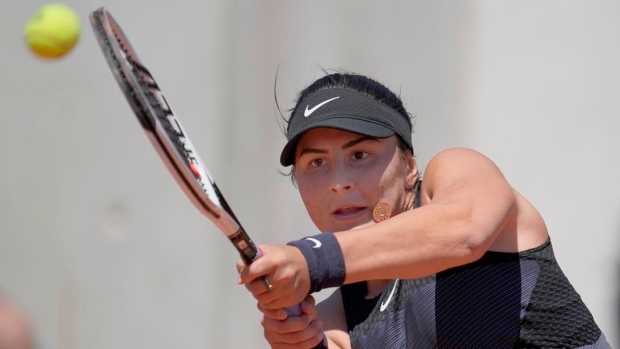 Bianca Andreescu grew up watching tennis at the Olympics, envisioning herself one day competing for Canada with a gold medal on the line.

While she won't be in Tokyo when the Olympic tennis tournament kicks off this weekend, the Mississauga, Ont., native will watch on TV as her teammates attempt to live out her gold-medal dreams.

Andreescu, the 2019 U.S. Open winner, pulled out of the Olympics earlier this month.

She called the decision "difficult," and "disappointing," but one made with her physical and mental health in mind amid the COVID-19 pandemic.

And at 21, she hasn't given up on her Olympic goals.

"I know I'm going to have hopefully another two Olympics in me because I'm feeling really confident about what I have to offer to myself and to the world," Andreescu said on a Zoom call with The Canadian Press.

"I've been watching (the Olympics) ever since I was little, picturing myself in their position. So I'm really, really hoping it can become a reality."

Andreescu said the ongoing pandemic was the "main reason" she decided to skip the Tokyo Games.

She was impacted both directly and indirectly by COVID-19 this year, testing positive for the virus in April and missing the Madrid Open, and having her routing and training schedule thrown off by self-isolation and pandemic restrictions at other tournaments, including the Australian Open in February.

Andreescu will next compete at the National Bank Open in Montreal, which begins Aug. 6. She won the event, then called the Rogers Cup, the last time it was played in 2019.

Andreescu said she has high hopes for Canada's tennis team in Tokyo, which features 18-year-old Leylah Annie Fernandez, ranked No. 72 on the WTA Tour, and world-No. 15 Felix Auger-Aliassime, both of Montreal.

Andreescu has known Auger-Aliassime since they were 12 years old, and she's trained with both him and Fernandez over the years.

While Auger-Aliassime is still looking for his first ATP title after appearing in eight finals, Andreescu said she feels he's on the cusp of breaking through. His quarterfinal run at Wimbledon this month, his best showing at a Grand Slam, is a testament to that.

"I have no worries about him," Andreescu said. "I'm sure he can continue to do well and even better, and I really think he has the potential to win a Grand Slam."

Andreescu will also keep a close eye on the swimming competition in Tokyo, where good friend Penny Oleksiak of Toronto aims to defend her 100-metre freestyle gold medal — one of four medals the then-16-year-old won at the last summer Games in 2016.

Andreescu remembers watching Oleksiak's impressive Olympic debut in Rio five years ago, and while the two didn't know each other then, Andreescu said it was inspiring to see the breakthrough performance.

"I (was) watching her and I was like, 'holy crap, I want to be like that. I want to do that,'" Andreescu said with a laugh. "So it's super sad that I can't be there, but I'm definitely going to watch her and cheer her on."

This report by The Canadian Press was first published July 22, 2021.