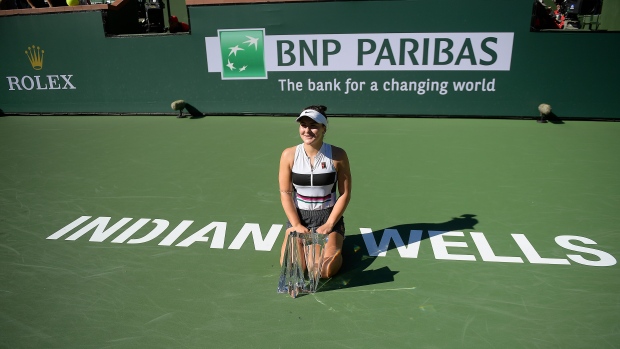 Bianca Andreescu wasn't lacking for determination in her stunning upset of Angelique Kerber in the final of the BNP Paribas Open.

The Canadian teenager essentially let out a battle cry midway through the third set — "I want this so bad!" — during her on-court meeting with coach Sylvain Bruneau. Andreescu won four of the next five games to complete a 6-4, 3-6, 6-4 victory for her first career WTA Tour title on Sunday in Indian Wells, Calif.

"To be honest, I felt the moment when she stood up from her chair — the energy was there," Bruneau said Monday. "Because sometimes a player, they're beaten up a little bit, and they (struggle) out of the chair. I just felt it was like — boom. I just felt it. We said a few more words and I just felt she was ready to go.

"She did it and my hat goes off to her. That's pretty amazing what she did."

Bruneau had just over a minute to talk with Andreescu, who looked like she was starting to fade against the three-time Grand Slam champion.

The physical toll was obvious. An icebag soothed Andreescu's burning legs. She had already received treatment in the right arm and shoulder area. Her feet felt torched and she said she was having trouble moving on the court.

Andreescu, 18, also was searching for answers against an experienced veteran who's considered one of the best counter-punchers in the game.

Bruneau had to pick his spots.

In a comforting yet motivating manner, he preached positivity and it paid off.

Midway through their chat, Andreescu extended the fingers on her left hand, tossed her energy drink in her bag and made the emphatic "I want this so bad!" declaration.

"When Bianca said that, I knew there was a door for me to try to ignite something in her because I know that she's a tremendous fighter," he told The Canadian Press from Irvine, Calif. "I knew it was important for me to try to help her to the finish line."

Bruneau told Andreescu to push and to stay strong under the adversity. He also reminded her that she's up for the challenge of top competition.

"I didn't think it was the time to talk about tactics that much, but mostly just focus on that mental aspect," he said. "I felt that at that point, it was going to make the difference — the approach, the mindset, how she was going to go and play the next game."

Andreescu, from Mississauga, Ont., earned US$1,354,010 million for the title. She also rocketed 36 positions to No. 24 in the latest WTA Tour world rankings.

Patrick Mouratoglou, who serves as coach for Serena Williams, tweeted it was "amazing" how Bruneau helped Andreescu get her composure and confidence back at the changeover. He called it the moment that changed the outcome of the match.

Bruneau stepped away from Fed Cup captain duties last year to focus on coaching Andreescu and others in the Canadian women's program.

"I think in the end he played it perfectly," Downey said from Toronto. "At the end of the day, he was providing positive reinforcement. He just needed to convince her that she had the fight, that she had the strength, that she had to go for every point. I think the optimism that he brought to the situation pumped her up because quite frankly at that point in time, her body was telling her, 'I'm going to lose.' It was her mind that carried her through actually.

"So I think it was a remarkable piece of coaching, but it also showed the fight she had. Unbelievable fight."

Pegged as a player to watch after a strong junior career, Andreescu has all the tools for success on the main circuit.

Starting the year ranked No. 152 in the world, Andreescu's breakout performance came in January at the ASB Classic with victories over former world No. 1s Venus Williams and Caroline Wozniacki in Auckland, New Zealand.

She hasn't slowed down since and doesn't seem the least bit intimidated playing some of the WTA's top players.

Andreescu's power game forces opponents to play on their heels and her short game keeps them guessing. She's masterful with her angles, changes things up with powerful topspin shots, and mixes in slices. Nagging minor injuries, cramping and exhaustion didn't slow her down after a long week at Indian Wells.

"She has this great quality that makes the difference between the good players and the great players," Bruneau said.

She didn't have time for a big celebration on Sunday night. Bruneau said it took three hours to drive from Palm Springs to Irvine and Andreescu needed a 90-minute physiotherapy session that lasted until midnight.

They planned to travel to Florida later Monday.

Andreescu was scheduled to take on Romania's Irina-Camelia Begu in the first round of the Miami Open. The main draw of that events starts Wednesday.