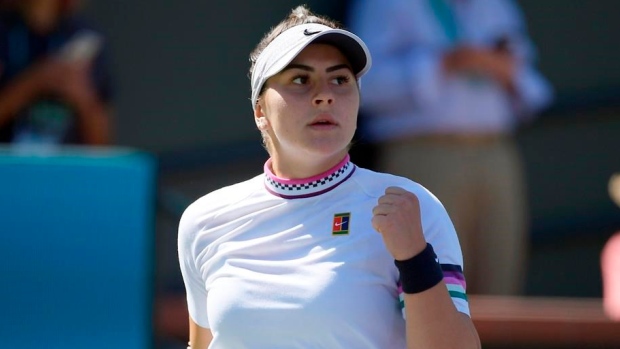 Bianca Andreescu has captured the imagination of Canadian sports fans with her Cinderella-like journey to the BNP Paribas Open women’s singles final Sunday.

But the Mississauga, Ont., native didn't just appear out of nowhere. Few who've followed the Canadian doubted she'd get here but the surprise was that it happened at age 18 and at one of the WTA Tour's biggest events.

Three years ago as the world's third-ranked junior player, the outlook wasn't nearly as rosy.

She missed six months after two stress fractures in her foot in early 2016. Andreescu couldn't run so she was hitting for a half-hour or an hour each day in Toronto with Tennis Canada coach Andre Labelle rolling around the court in an office chair with the back removed.

“She could volley from the chair," Labelle said Saturday as Andreescu geared up for Sunday's final against No. 8 seed Angelique Kerber of Germany. "And we worked on her hand skills a lot so she could improve her drop shot."

Labelle worked with Andreescu throughout her junior years until last season.

“When she was younger, she could often catch her service toss," he said. "But sitting on the chair, she adjusted it because she knew if she tossed it badly it was hard to run after it.

"She actually improved her serve — even sitting down."

Andreescu’s early story was one of injuries so there was understandable apprehension with every new twinge. The stress fractures healed but every time she felt something in her foot, she worried.

Last summer was a write-off due to back woes. Andreescu missed the Rogers Cup and arrived at U.S. Open qualifying short on match play and with a back that still ached.

She took the time to heal it and with a solid effort during the fall season on the lower-level ITF Tour set the table for 2019. Andreescu had to learn her body to distinguish between normal muscle soreness she could battle through and real injuries that required attention.

So even if the back was a little sore during her first-round match at Indian Wells against Romanian Irina-Camelia Begu, she kept going. Even if her left calf, taped in previous matches, was close to cramping in Friday’s semifinal against No. 6 seed Elina Svitolina, she put it aside.

And now, Andreescu is one match away from her first career WTA Tour title.

“It was a different match than against (No. 20 seed Garbine) Muguruza or (No. 18 seed Qiang) Wang — hitters who take the ball early, keep it deep," coach Sylvain Bruneau said Saturday. "Svitolina puts a lot of balls into play.

"What I really liked — at the end of the match, in all the adversity, with the lost match points — was how she stayed there, fought, displayed nice maturity. Because it was getting complicated and Svitolina is a good fighter.”

But it’s not just the winning that’s drawing rave reviews: it’s the way Andreescu is doing it.

Andreescu’s game is a breath of fresh air in an era dominated by big forehands and backhands.

Being able to rob her opponents of rhythm with her changes of pace isn't unusual. But the Canadian's ability to combine that with power from the baseline to hit winners when the opportunities are created is fairly unique currently in women’s tennis.

“We always told her with her tennis she’s going to change the women’s game a little," Labelle said. "We can make a specific gameplan depending on the opponent — and she can execute it.

For two years, Andreescu regressed somewhat. She seemed content to hug the baseline and slug it out with opponents and play a more one-dimensional, typical style. Trouble was, she didn't do that as well as others who spent their careers doing only that.

Labelle and Bruneau got to work. They backed her off the baseline to give the ball more shape.

“From there, she could work her natural rally ball, which has more of an arc and beautiful rotation," Labelle said. "And we worked on depth so she could neutralize points with her rally ball.

"Once she was inside the court, she could hit her drop shot. We worked her slice so she could change the rhythm. She always had it in practice but in matches she missed quite a few. But by last fall, it was evolving.”

At the Tevlin Challenger in Toronto last October, Labelle said he told Andreescu's parents “next year, she will take off.”

He was prescient. Bruneau, too, felt her efforts last fall set the table for a breakout season.

Andreescu’s physical side also has evolved.

“She has improved her stamina," Labelle said. "Mentally, you want to finish the points too soon because you know you can't stay long enough in the rally.

"Already, mobility-wise, she covers the court better. So imagine in five or six years.”

Of course, Andreescu’s secret is out. And with the leap in her rankings, she'll be playing against the top players every week now.

But if there’s a pattern to Andreescu’s game, it’s that there’s … no predictable pattern.

“Everything she has, it will stay there, and will continue to improve,” Labelle said. “And in her tactical choices, and choices of patterns, she’ll be clearer about what to do, and when to do it.

“It all comes with experience.”

Bruneau said it was undeniable that everything around Andreescu has changed.

“My goal with Bianca and the people close to her is to keep her well grounded," Bruneau said. "It’s very different from six months ago when we did things in the shadows, in the smaller tournaments.

"We worked just as hard then, but under the radar."

But he said there are many elements of Andreescu's game that can improve. And seeing the tangible results of all the toil in the shadows can only be motivating.

“You get those small results, those moments, and you keep your eye on the future and say it’s all going to pay off," he said. "But when you get closer to it, see the benefits of all the time and effort you invested, all the sacrifices you made in some ways it’s easier because you don't have to hope for that long-term payoff any more.