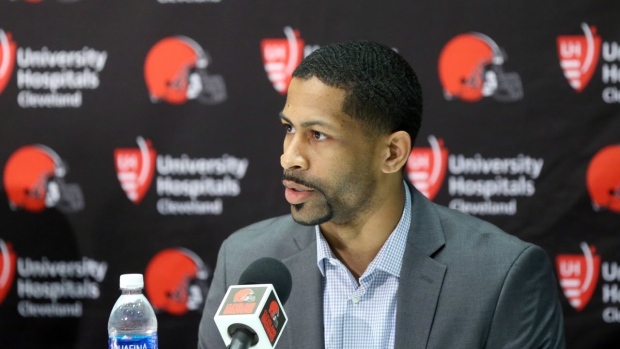 CLEVELAND — The Browns have a new general manager, and they don't any need time to get to know him.

Andrew Berry was named Cleveland's GM and executive vice-president on Tuesday, returning to the team after a one-year stint in the Philadelphia Eagles' front office. Berry was the Browns' vice-president of player personnel from 2016-18, when the team went 1-31 over two seasons and was mired in dysfunction.

But owners Dee and Jimmy Haslam believe in Berry and will now align him with new coach Kevin Stefanski, the former Minnesota Vikings offensive co-ordinator hired earlier this month. Berry's five-year contract was reported by The Associated Press and others on Monday.

Berry will be re-introduced at a news conference on Feb. 5 at the team's facility in Berea.

The 32-year-old Berry is the NFL's youngest GM and the second African American in that position. He joins Miami's Chris Grier as the only minority GMs in a league that has been widely condemned for its hiring practices.

He also is the fifth head of football operations hired by the Haslams, who have shown little patience with coaches or decision-makers since they bought the franchise in 2012.

"We are thrilled Andrew will lead our football operations," the Haslams said in a news release. "We have always been profoundly impressed with him as a consummate professional who has meticulously studied his craft every place he has worked and is extremely dedicated to utilizing every resource to improve an organization and to enhance his own knowledge. He will be a tremendous partner with Kevin as he embraces the critical nature of his relationship with the head coach. We know he can’t wait to get to work.”

Berry isn't wasting a minute. As the Browns announced his return, he was in his office at the team's headquarters.

Berry joined the Browns in 2016 after seven seasons with Indianapolis Colts, where he worked his way up from scout to leading the team's department.

In Cleveland, he was part of the regime under Sashi Brown that tore down the Browns' roster by making numerous trades in order to acquire future draft picks as assets. But the organization still struggled to choose the right players.

The Browns have only two players remaining from their 2016 draft class, and linebacker Joe Schobert and wide receiver Rashard Higgins are both eligible to be free agents in March.

“I’m appreciative of the Haslam family for entrusting me to be a steward of a franchise that is so rich in tradition and history,” Berry said. “The passion for football courses through the veins of Northeast Ohio in a manner that is unique to that of any other region. Our fan base’s devotion to the Browns is the catalyst for such affection for the sport.”

Berry returns to a different Browns team from when he left last year to join the Eagles. Cleveland's roster has been stockpiled with young talent, most notably wide receivers Odell Beckham Jr. and Jarvis Landy, quarterback Baker Mayfield and Garrett. But the team didn't mesh last season and finished 6-10 after initially being labeled a playoff contender.

Berry and Stefanski, who is only 37, could be the tandem the Haslam have always wanted to lead their team.

“I’ve always respected him for the way he’s carried himself in this profession,” Stefanski said. "Andrew is extremely knowledgeable and is always looking to improve himself. We share a vision on the type of team we need to build to have the success our fans deserve. I’m excited and very much looking forward to getting to work with Andrew and developing the type of partnership needed for sustained success.”

Berry was a four-year starter at Harvard. He graduated with a bachelor’s degree in economics and a master’s in computer science.