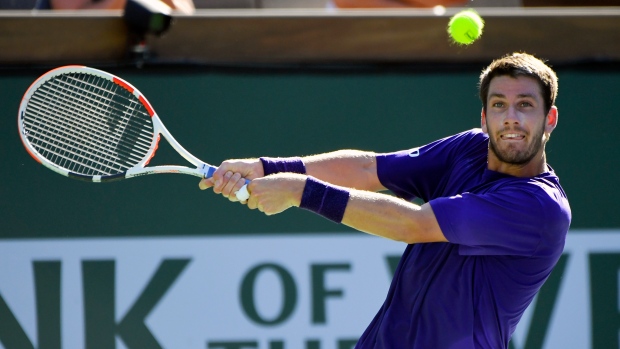 Murray was let down by his serve — nine double faults and landing only 49% of his first serves — and 36 unforced errors.

The two-time Olympic champion got off to a poor start and dropped the opening set with a shanked forehand return. Koepfer led 6-4, 5-3 but Murray raised his game and won four straight games to level the set score.

In the decider, Koepfer saved two match points at 5-4 with a smash and a backhand winner before saving five more in the tiebreaker. They went for three hours.

“I didn't deserve to win the match. I didn't play well enough to win,” Murray said. "I had a ton of opportunities at the end to do it, but the way that I was playing tonight was not good enough.”

Ranked 144th in the world, Murray received a wild card in his stuttery quest to come back from hip surgery and improve his ranking and get easier draws next season. His singles win-loss record is 13-13 this year. Murray was initially scheduled to play American qualifier Jenson Brooksby. But Brooksby withdrew because of abdominal pain and was replaced by Koepfer.

Murray's fellow Briton Cameron Norrie stayed in contention for one of the two remaining ATP Finals spots by cruising past Federico Delbonis of Argentina 6-2, 6-1.

The 10th-seeded Norrie produced a solid performance, winning nine straight games from 2-2 in the opening set to 5-0 in the second. The Indian Wells champion saved the only break point he faced. Delbonis suffered a ninth straight first-round loss.

“It was a very physical match,” Norrie said. "I managed to get out of a lot of situations and managed to race through my service games pretty quickly when I was hitting my spots.”

"It’s cool to have this added pressure of playing for an extra event at the end of the year,” said Norrie, who has never been to the elite finals.

Also reaching the second round were Sebastian Korda of the United States, Marton Fucsovics of Hungary, Ilya Ivashka of Belarus, and Alexander Bublik of Kazakhstan.

Fucsovics outlasted Fabio Fognini of Italy 6-1, 6-7 (6), 7-6 (5) to earn a meeting with top-seeded Djokovic, who got a first-round bye. Fognini saved a match point in the second-set tiebreaker but then failed to serve out the match at 5-4 in the third.

Bublik got nervous trying to close out Daniel Evans of Britain, making six double faults while serving for the match at 5-4 in the third. Bublik eventually got there, 2-6, 7-5, 7-5.

Ivashka defeated Albert Ramos-Vinolas of Spain 6-3, 7-6 (2) to next face defending champion Daniil Medvedev, who got a first-round bye.

In doubles, Djokovic and Serbian compatriot Filip Krajinovic rallied past Australians Alex de Minaur and Luke Saville 4-6, 6-4, 10-7. Djokovic struggled on serve, double-faulting in each of his service games.

Djokovic returned to competition by playing doubles to build up his fitness and prepare for the Davis Cup. The 20-time Grand Slam champion could also in Paris clinch the year-end No. 1 ranking.