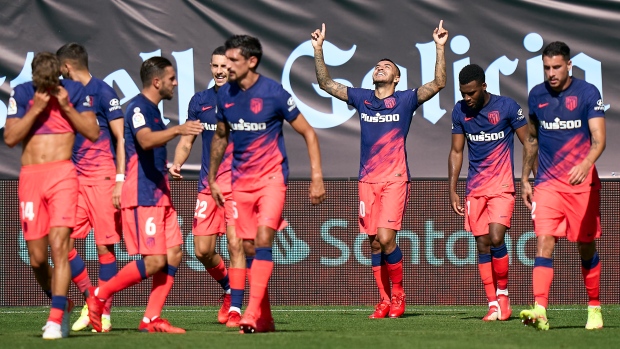 MADRID (AP) — Ángel Correa scored a goal in each half as Atlético Madrid opened its title defense with a 2-1 win at Celta Vigo on Sunday, extending its unbeaten streak in Spanish league openers to 12 matches.

Correa, starting in attack in place of Luis Suárez, opened the scoring with a low shot from outside the area in the 23rd minute. He added his second from inside the box in the 64th after Iago Aspas had equalized for the hosts by converting a 59th-minute penalty kick following a hand ball by Marcos Llorente.

Aspas had the best chance to equalize in the 80th after going around Atlético goalkeeper Jan Oblak inside the area, but his shot into the open net went just wide.

The benches were emptied in stoppage time after an altercation following a foul by Hugo Mallo on Suárez. Mallo and Atlético’s Mario Hermoso got red cards.

The home loss kept Celta winless in its last six league openers, since beating Levante 2-1 in Valencia in 2015.

Atlético’s last loss in its first league game of the season came in 2009 — losing 3-0 at Málaga — before the arrival of coach Diego Simeone.

Suárez, the former Barcelona striker who was key for Atlético in its title run last season, came into the match as a second-half substitute for Correa with the Uruguay striker still trying to regain his best form.

The match at the Balaídos Stadium marked the official debut with Atlético for Argentina midfielder Rodrigo de Paul, the only significant addition to a squad that didn’t lose any of its main players after its successful season in 2020-21.

About 7,000 fans were at the Balaídos as Spanish health authorities allowed the league to restart with crowds of up to 40% of the venues’ capacity.

Real Madrid won 4-1 at Alavés on Saturday with a pair of goals by France striker Karim Benzema.