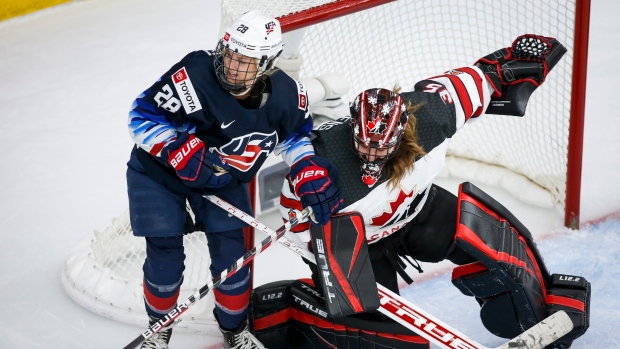 Team Canada finds themselves in new goaltending territory heading into the 2022 Beijing Olympics.

Ann-Renée Desbiens, Emerance Maschmeyer and Kristen Campbell were named the three goaltenders to centralize ahead of the 2021 world championships, with all three having played at least one game post-Worlds in the lead-up to the Olympics.

However, if recent play is any indication, the question of who has earned the starting role is not set in stone.

Barring injury or uneven play, the 24-year-old Campbell will remain the No. 3 goaltender in Beijing, leaving the two veterans in Desbiens and Maschmeyer to duel it out to be No. 1.

“My assumption would be that it would be Desbiens’ net to start, however, Maschmeyer is right there,” said TSN Hockey analyst and two-time Olympic gold medallist Cheryl Pounder. “In a short-term tournament, if someone isn’t looking as sharp or as clean as maybe you would want, I think that it could go either way. Because it all comes down to one game when you hit the playoff round.”

Desbiens saw most of the work for Canada at the 2021 worlds. Starting five of seven games, she recorded a .908 save percentage and 1.37 goals-against average. Desbiens allowed two early goals in the gold-medal game against the Americans but held the fort the rest of the way as Canada fought back to win 3-2 in overtime.

Maschmeyer played the other two games for Canada, allowing zero goals while picking up victories over Switzerland and Germany.

Post-tournament is where the Canadian coaching staff took the opportunity to split the starts more evenly amongst the goaltenders.

All three goaltenders got a start in the three-game series sweep against Finland in November. Maschmeyer took Game 1, stopping 17 of 19 shots in a 4-2 win. Campbell made her senior national team debut in Game 2, stopping all 13 shots she faced for an 8-0 shutout while Desbiens picked up a 5-1 victory in the finale, making 21 saves.

The Rivalry Series against the United States saw Desbiens and Maschmeyer getting three starts each in the six games played.

Pounder stresses the importance of both goaltenders being ready from the get-go.

“They’re vying to get the big game at the Olympics, but it starts on Day 1,” said Pounder. “Making sure, whether you have a ton of shots or not, that you’re focused, you’re clean, your rebounds and the control, how you play the puck.

“I believe that they will both get games early until they [coaching staff] have an idea of what they want to run with. Even leading into a semi, it can change quickly come the final, so I think both need to be ready to just take care of the moment and let it play out.”

In terms of Olympic experience, Desbiens was the third goalie in PyeongChang, where she played one game in the preliminary round, an 18-save shutout against the Olympic Athletes from Russia.

Beijing will be Maschmeyer’s Olympic debut. After an excellent performance at the 2016 worlds where she was named best goaltender with a .956 save percentage and 1.25 GAA, she struggled in 2017 and did not centralize with Canada in 2018.

With an expanded pool this year, Canada will now play four games in the preliminary round, with matchups against Switzerland, Finland, ROC and United States in Group A.

“Both have had the winning record in the Rivalry Series against the Americans,” said Pounder. “So, that in of itself has to give [head coach] Troy Ryan some sense of calm as he enters these Games knowing that he has two ‘tenders that can do the job for him.”