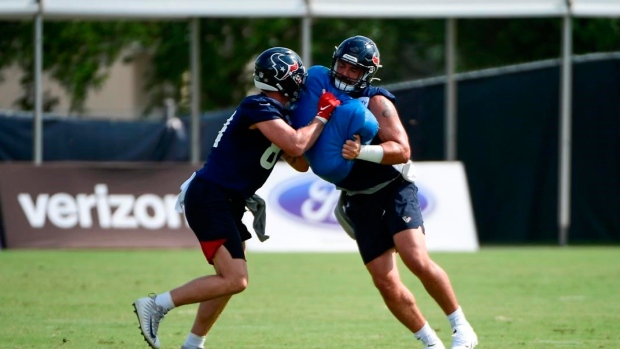 Once again, Antony Auclair heads into an NFL off-season somewhat unsure about his future.

The Canadian tight end completed his first season with the Houston Texans after four years with the Tampa Bay Buccaneers. Auclair is scheduled to become a free agent in March, marking the third time in his NFL tenure that he'll do so.

"We're (into) our third free agency so I'm getting used to it, I guess," Auclair told reporters Monday during a video conference. "I think this year if we want to go to a long-term contract, this is the year to do it.

"I will be 29 (when '22 NFL kicks off), it's time now that we move forward with a longer-term contract than a one-year, that's for sure. That's what we're looking for and I think I had a good enough year to move forward with that."

The six foot six, 256-pound native of Notre-Dame-des-Pins, Que., had five catches for 47 yards and a TD last season. Auclair's production isn't surprising as he's known much more for his blocking prowess than being an integral part of the passing game.

It was yet another difficult season for Houston (4-13), which registered just four regular-season wins for a second straight year. The Texans are also looking for a new head coach as David Culley was fired after just one year at the helm.

But Auclair definitely left the door open Monday to a return to Houston in 2022.

"Definitely, for sure," he said.

Sasha Ghavami, Auclair's agent, said he and his client will again evaluate all of their options heading into free agency.

"I thought he had a good year this year in Houston," Ghavami said. "I know the team really appreciated what he brought and what he did.

"I think there's obviously mutual respect and mutual happiness in the situation. I think looking at our options we'll see what comes about but it's still early . I think the discussions will commence probably in a month or six weeks from now and we'll see what happens."

Auclair signed a one-year deal with Houston in April 2021 shortly after celebrating a Super Bowl title with Tampa Bay. Auclair was on the Buccaneers' 53-man active roster but didn't dress for their 31-9 championship win over the Kansas City Chiefs on Feb. 7, 2021.

Auclair cracked the Buccaneers' roster in 2017 as an undrafted free agent out of Université Laval. That made him the first player in Laval's rich football history to make an NFL lineup.

The '21 season was certainly one of highs and lows for Auclair, who went from the euphoria of celebrating a Super Bowl championship to enduring the adversity that is a rebuilding season. But it's not something Auclair hasn't done before.

Leading up to Tampa Bay's Super Bowl title, the franchise had posted records of 5-11 (2017-18) and 7-9 (2019). Head coach Bruce Arians was hired prior to the '19 season, then the Buccaneers added quarterback Tom Brady and colourful tight end Rob Gronkowski in time for the '20 campaign.

Last year, the Bucs finished with an 11-5 regular-season mark before going 4-0 in the playoffs.

"I compare this year with my first year with Tampa where we were trying to rebuild the team," Auclair said. "We had a coaching change and added (Brady and Gronkowski) but I think the core of the team was the same.

"I think if we do the same thing in Houston, I think we could be good."

"But at the same time it's not something I or the team can control."