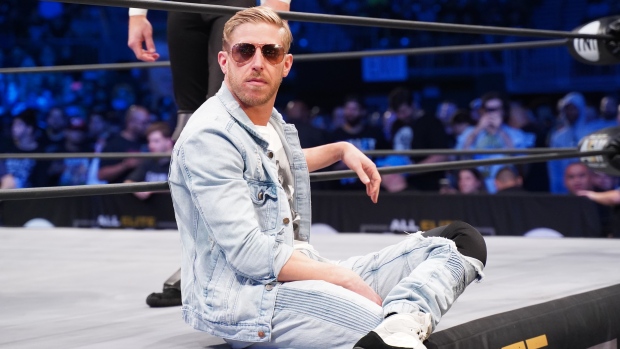 The months-long blood feud between Orange Cassidy and Chuck Taylor and Miro and Kip Sabian comes to a head with an Arcade Anarchy match on AEW Dynamite. You can catch AEW Dynamite on Wednesday night at 8pm et/5pm pt on TSN2, the TSN app, streaming on TSN Direct and on TSN.ca.

Arcade Anarchy match: "Freshly Squeezed" Orange Cassidy and Chuck Taylor vs. "The Best Man" Miro and "Superbad" Kip Sabian (w/ Penelope Ford) - The feud began with video games and will now end with them. The enmity between these two teams began all the way back in the fall on the Dynamite anniversary episode during a tag-team title match between Best Friends (Taylor and Trent?) and FTR (Dax Harwood and Cash Wheeler). As the action spilled out of the ring and into the ringside area, Trent? went headlong into an arcade cabinet that Sabian was playing, destroying it. After the match was over, Miro - the owner of the game - stormed to the ring and laid waste to Best Friends. The feud grew more intense when Miro and Sabian put Trent? out of action with a brutal beating in December from which he is yet to return. Things took another turn in January when Miro defeated Chuckie T. in a match that forced Taylor to serve as Miro's butler until Kip and Penelope's wedding in February. While the actual wedding went off without a hitch, the joy was short-lived when Taylor and Cassidy laid out Kip and Miro as Ford fell into her cake. It appeared that the match between the two teams at Revolution in which Miro and Sabian were victorious would finally settle the score, but Chuckie T. and Cassidy made one last challenge and this is it. While the exact rules aren't known just yet, what we do know is that the ring will be surrounded by arcade cabinets. What we also know is that months of frustrations are finally going to be let all out and whatever happens won't be pretty.

Six-man tag team match: AEW World Champion "The Cleaner" Kenny Omega (w/ Don Callis) and The Good Brothers (Doc Gallows and "Machine Gun" Karl Anderson) vs. Lucha Bros. (Rey Fenix and Penta El Zero M) and Laredo Kid - The genesis of this match came at the end of last week's six-man tag between the Lucha Bros. and Laredo Kid and the Young Bucks (Nick Jackson and Matt Jackson) and Brandon Cutler. Omega entered the ring to attack Laredo Kid, the man Omega successfully defended his AAA Mega Title against at TripleMania XXVIII in December. There is no love lost between Omega and the Lucha Bros., either, having crossed paths with the pair on a number of occasions in both AEW and AAA. In fact, the team of the Lucha Bros. and Laredo Kid teamed up against Omega and his now estranged friends the Jacksons at Fyter Fest 2019 in which The Elite came out victorious. But this is a different Omega, one consumed with anger and paranoia and one whose worst instincts are being enabled by Callis. While this match will be fuelled by an intense dislike, the chances of it becoming a spectacle when you consider its participants is high. This one should not be missed.

Christian Cage vs. Frankie Kazarian - When Cage arrived in AEW, he vowed to outwork everyone. Well, the work begins tonight exactly seven years and one week removed from his last competitive match against a foe he knows very well in Kazarian. Cage and Kazarian met in the ring for the first time nearly 20 years ago in tag-team action. At Ultimate Pro Wrestling's It's On event in Santa Ana, CA on Apr. 24, 2001, the team of Edge and Christian defeated Kazarian and Nova on a card that also featured the likes of Samoa Joe, Tommy Dreamer and Rocky Romero. The pair would go to cross paths a number of times in Impact Wrestling (TNA). The pair last met in a singles match in a ladder match in 2007 when Kazarian defeated Cage to become the No. 1 contender for the TNA Heavyweight Title. While Kazarian is mostly focused on his SoCal Uncensored tag team alongside Christopher Daniels, these days, he's still an accomplished singles wrestler, having held a number of titles over his career including the Pro Wrestling Guerrilla World Title and the TNA X-Division Championship. Just this past week on AEW Dark: Elevation, Kazarian defeated Danny Limelight in a tune-up match. Kazarian knows that the pressure will be on Cage during this match and would take great pleasure in ensuring that his old rival's debut is an unsuccessful one.

AEW Women's World Champion Hikaru Shida and Tay Conti vs. "The Native Beast" Nyla Rose (w/ Vickie Guerrero) and The Bunny (w/ Matt Hardy) - Tay Conti got the biggest win of her young career on last week's Dynamite when she upset Nyla Rose, but she didn't have the chance to celebrate. After the match, a vengeful Rose and Guerrero took out their frustrations on Conti until Shida made the save. But the odds weren't evened for long when the Bunny came down to ringside to attack Conti and Shida as the Hardy Family Office looked on in approval. This match marks the Bunny's first action on a Wednesday night since July and only her second match of 2021 with her focus having squarely been on being the valet for the Butcher and the Blade. But now with "Big Money Matt" in her corner, the Bunny is once again intent on getting her hands on Shida's title. With Shida and Conti out for revenge, can the Bunny and Rose use their emotions against them?

Exhibition match with Arn Anderson as special guest referee: "The American Nightmare" Cody Rhodes vs. QT Marshall - Nobody knows what exactly is going on with QT Marshall and the Nightmare Family right now. During the Casino Battle Royale at Revolution, Marshall eliminated himself from the match and proceeded to flip off Natural Nightmares tag-team partner Dustin Rhodes on the way to the back. Days later on Dynamite, Marshall stood idly by as Ethan Page put the boots to one of his students, Lee Johnson. Wednesday night's match is happening at the request of Marshall as he takes on the man who called him his "best friend" on last week's Dynamite. Marshall feels that all of his hard work behind the scenes has gone noticed and unappreciated and he wants to rid himself of the label of being nothing more than just "Cody's friend." To do that, he wants to beat Rhodes. But is Rhodes taking this seriously? He said last week that he refused to hurt QT and if he locked on the figure four, he would release it. Just how friendly will this exhibition actually be if Marshall continues to feel patronized by Rhodes?