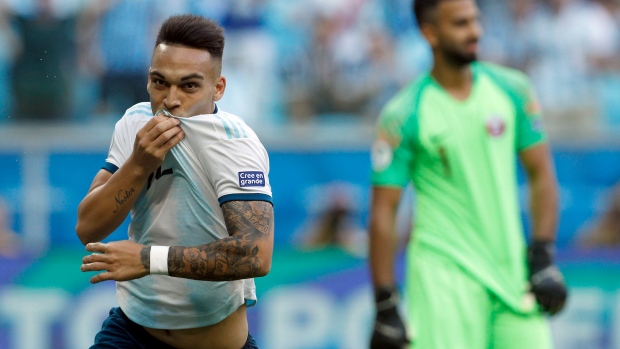 PORTO ALEGRE, Brazil — Lionel Messi's Argentina escaped an embarrassing group-stage elimination in the Copa America, just like it did in the World Cup a year ago.

But after yet another lacklustre performance by Messi and his teammates, expectations remain low for Argentina on its quest to make it to the final and end a 26-year title drought.

"We needed a victory to give us confidence and tranquility," said Messi after the team's 2-0 win over guest Qatar on Sunday. "What I liked the most was the team's attitude, its desire to win the game."

But the victory didn't disguise another disappointing performance that followed an opening loss to Colombia and a draw against Paraguay.

Messi again couldn't come up with the type of performance that Barcelona fans are used to seeing from him in Spain. His disappointing display was summed up with about 20 minutes left at the occasionally bumpy Arena Gremio when he had an uncharacteristic miss in front of the goal, sending a close-range shot several meters (feet) over the crossbar and leaving the crowd of more than 41,000 stunned.

It was Sergio Aguero who eventually came up with the goal that sealed Argentina's victory and a place in the quarterfinals of the South American competition, avoiding its first group-stage elimination since 1983.

In last year's World Cup in Russia, Argentina also arrived at its last group game needing a victory to avoid elimination, and that time it pulled off a 2-1 win over Nigeria to stay alive, with Messi scoring one of the goals.

Argentina's next opponent in the Copa America will be Venezuela, a team it lost to in a friendly game in March and which held host Brazil to a 0-0 draw in the group stage. If Argentina advances, it will likely take on Brazil in the semifinals.

"Now it's all or nothing, we can't make mistakes," said Messi, who turned 32 on Monday. "It's another Copa. The matches are different, you either win or you go home."