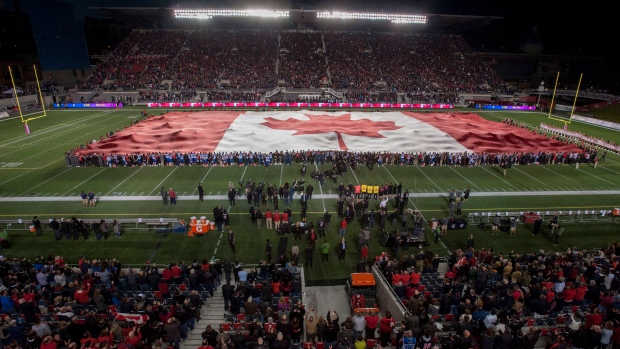 TORONTO - The Toronto Argonauts are being forced out of their home stadium by baseball's powerhouse Blue Jays.

The CFL club will play its Oct. 6 home game against the Redblacks in Ottawa because the Blue Jays could be hosting the American League wild-card game that day at Rogers Centre. And more changes could be coming.

The Argos, whose home schedule has already been heavily impacted by this summer's Pan American Games, have three more games at Rogers Centre in October. Should the Blue Jays reach the World Series, the CFL club's contests Oct. 17 (versus Calgary) and Oct. 23 (versus Montreal) could also be relocated.

Toronto's home game against the B.C. Lions on Oct. 30 will go ahead as scheduled as will their final game of the regular season on Nov. 6 against Winnipeg. The World Series will finish no later than Nov. 4.

There isn't any flexibility in the baseball playoff schedule, which is set and controlled by Major League Baseball.

"We have been aware for some time that Rogers Centre might not be available to our team during the month of October should the Toronto Blue Jays make it into the MLB post-season," Argos CEO Chris Rudge said in a statement. "Due to the tremendous success the Blue Jays have experienced this season, Rogers Centre officials informed us in writing several weeks ago to begin seeking out alternative locations for some of our October home games."

Rudge said getting the message out about the Oct. 6 game well in advance was a priority. The team will be contacting fans — the club has a season-ticket base of about 5,000 — who have already purchased tickets shortly.

"As an organization, our preference is not to have our team play back-to-back games in Ottawa," he said. "But this is an extraordinary circumstance and TD Place Stadium is available, CFL-ready and broadcast-ready."

The Argos are in their final season at Rogers Centre and will move into a refurbished BMO Field in 2016.

The Pan Am Games forced the team to play its first five games of the season on the road, including the home opener against Edmonton in Fort McMurray, Alta. Toronto didn't play its first game at Rogers Centre until Aug. 8, a 30-26 victory over Saskatchewan.

The Argos have played just three games in Toronto this season.

The Blue Jays, meantime, may not even need to play on Oct. 6. They entered Wednesday's play with a three-game division lead over the New York Yankees and, according to Baseball Prospectus calculations on the Major League Baseball website, have just a 13.4 per cent of slipping into the first wild-card spot.

Toronto is more likely to win the division title (86.6 per cent), in which case the Jays wouldn't open their first-round series until Oct. 8.

The Argos' decision to relocate the Oct. 6 game impacts their playoff drive. Toronto (6-5) is currently tied with Ottawa (6-4) for second in the East Division, four points behind front-running Hamilton (8-3).

Toronto is idle this week while Ottawa visits the Saskatchewan Roughriders on Saturday. Then the Redblacks will host the Argos on consecutive weekends (Sept. 26 and Oct. 6) in what will be two crucial East Division contests.

The team finishing second in the standings will host the No. 3 seed in the division semifinal Nov. 15. The winner will then visit the first-place squad in the conference final Nov. 22.

Predictably, the Redblacks, who are 4-1 at TD Place this season, are ecstatic the game will now be played on their home field.

"We are thrilled to be able to offer #RNation another home game, particularly at such a critical point in the season," said Jeff Hunt, the president of OSEG, the Redblacks' Redblacks parent company. "It will also be an opportunity for those who have yet to experience a game at TD Place to see why it's become the biggest party in town."