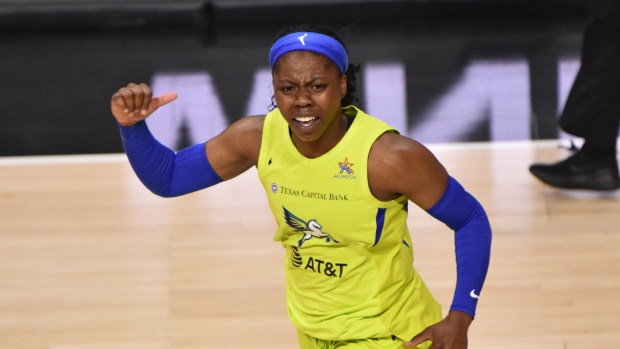 The league presents the awards annually to the players who lead the league in each of those categories during the regular season.

In her second season, Ogunbowale led the league with 22.8 points per game. Last season, she finished third in scoring as a rookie with 19.1 PPG. She scored at least 14 points in every game this season en route to her first scoring title and recorded four games with at least 30 points, including a career-high 39 points against the Washington Mystics on Sept. 6.

In her 13th WNBA season, Parker averaged 9.7 rebounds per game to win her third title in this category and first since back-to-back Peak Performer Awards for rebounding in 2008 and 2009.

The two-time WNBA Most Valuable Player posted 10 or more rebounds 12 times this season, including a streak of five consecutive double-digit rebounding games from July 30 – Aug. 9.  She grabbed a season-high 17 rebounds against the Mystics on Sept. 10.

Alyssa Thomas of the Sun ranked second in rebounding with 9.048 RPG, finishing just ahead of the Minnesota Lynx's Napheesa Collier (9.045 RPG), the Mercury's Brianna Turner (9.00 RPG) and the Mystics' Myisha Hines-Allen (8.9 RPG).

Vandersloot wins her fourth consecutive Peak Performer award for assists with another record-setting season and her fifth overall (she also won in 2015).

The Sky guard averaged a WNBA-record 10.0 assists in 22 games, breaking her record of 9.1 assists from 2019.  She also set the single-game record with 18 assists against the Indiana Fever on Aug. 31.

The two-time All-Star reached double digits in assists 12 times, including three games with 15 or more. On Aug. 18 against the Aces, she became the first player in league history to finish with at least 15 points, 15 assists and five rebounds in a game.