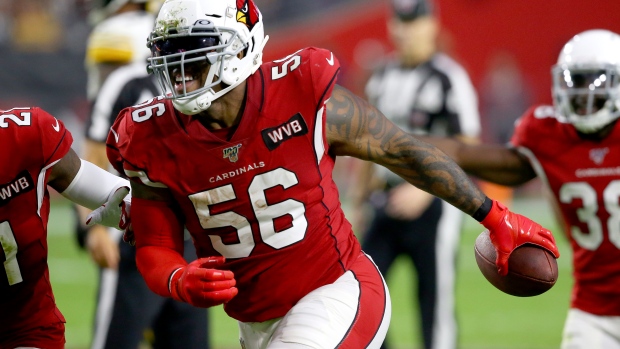 TEMPE, Ariz. — The Arizona Cardinals have released veteran linebacker Terrell Suggs with three games remaining in a disappointing season for both the player and the team.

The 37-year-old Suggs had some good moments for the Cardinals early in the year but his production diminished in recent weeks. He's played in all 13 games and has 35 tackles, including eight for a loss and 5 1/2 sacks.

Suggs, who played in high school in the Phoenix area and in college at Arizona State, signed with the Cardinals during the off-season after playing 16 seasons with the Baltimore Ravens. The Cardinals have lost six straight games and have a 3-9-1 record.

Cardinals coach Kliff Kingsbury said the decision to release Suggs was mutual between the player and organization and the Cardinals wanted him to have a chance to land with a team that's in playoff contention.

“There was disappointment that we didn't win more games,” Kingsbury said Friday. “As the season's gone on, out of playoff contention, we wanted to see what we have with some younger players. We felt like it was the best move for both parties.”

The 6-foot-3, 265-pound Suggs is a seven-time Pro Bowl selection and two-time All-Pro.

“We have such great respect for him,” Kingsbury said. “He was phenomenal in our building, work ethic, energy, the juice he brought every day, the professionalism was through the roof. We wanted to give him the opportunity to find a fit if it's out there.”

Kingsbury said the team wants to use some younger linebackers in the final three games, including Haason Reddick, who moved from inside to outside linebacker, where Suggs played.

The Cardinals host the Cleveland Browns on Sunday.