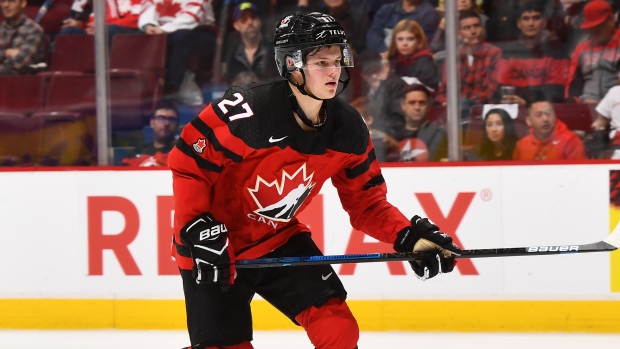 OAKVILLE, Ont. — Canada's world junior hopes got another big boost Thursday with the announcement that the Arizona Coyotes have loaned centre Barrett Hayton to the national team.

The fifth overall pick in the 2018 NHL draft, Hayton has one goal and three assists in 14 games with Arizona this season.

The 19-year-old from Peterborough, Ont., was part of the Canadian setup that finished a disappointing sixth at last year's world junior hockey championship in Vancouver and Victoria, finishing the under-20 tournament with four assists in five games.

The news of Hayton's addition comes after the Detroit Red Wings said Monday they would release Joe Veleno — another centre and a fellow veteran of last year's Canadian team currently playing with the American Hockey League's Grand Rapids Griffins — for the event in the Czech Republic, which runs Dec. 26 to Jan. 5.

Veleno is scheduled to join his teammates in Europe closer to the start of the tournament.

Canada invited 31 players to this week's selection camp in Oakville, but with both Veleno and Hayton in the mix, the number stood at 33 names before cuts that were scheduled to be made later Thursday.

"This is a great opportunity for Barrett to continue his development," Coyotes general manager John Chayka said. "Barrett will be one of Canada's leaders and will play a significant role on the team against some of the best young talent in the world. He will gain invaluable experience and will return to the Coyotes after the tournament to help us the rest of the season."

The program is still waiting to hear on two other players eligible for the tournament currently with NHL teams — centre Kirby Dach of the Chicago Blackhawks and defenceman Noah Dobson of the New York Islanders.

Hockey Canada, which needs to get down to 23 players, has said it will wait as long as needed to finalize its roster.

The national team is scheduled to fly to Vienna this weekend to continue preparations before exhibition games Dec. 19 against Switzerland and Dec. 23 against the Finns.

Canada has won gold at the world juniors 17 times since 1977, with the last victory coming at the 2018 event in Buffalo, N.Y.