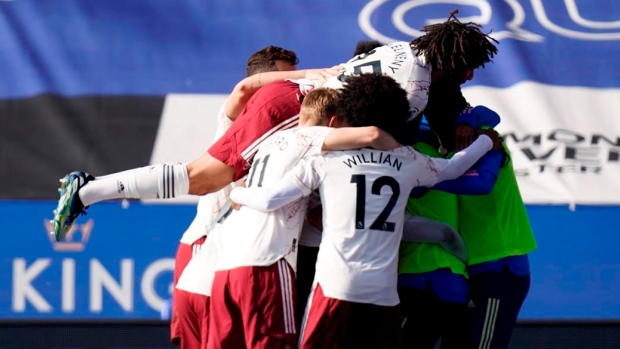 LEICESTER, England — Arsenal turned around its recent poor form to beat Leicester 3-1 on Sunday as the home side was left to deal with an injury which will keep influential midfielder Harvey Barnes out until April.

Arsenal started the day in 11th and returned to the top half with the win, while Leicester missed a chance to challenge Manchester United for second.

“We have to impose ourselves, it doesn’t matter who we play against, we have to have courage. I’m proud about winning but obviously the way we’ve done it,” Arsenal manager Mikel Arteta said. “The way we are playing looks much closer to what we want. The way the team is evolving, we have some consistency in recent months.”

Youri Tielemans gave Leicester the lead in the sixth minute when the Belgian midfielder surged down the right flank as Arsenal failed to close him down, and then shot low past Bernd Leno.

David Luiz levelled for Arsenal with his first league goal since October 2019, heading in Willian's free kick when he was left unmarked.

Pepe had earlier been denied a penalty when a video review showed he was tripped just outside the area by Wilfred Ndidi, but was key to winning a spot-kick just before half time when he struck a shot that hit Ndidi's arm as the Nigerian midfielder tried to block with his leg. Alexandre Lacazette stepped up to power the penalty in.

Pepe made it 3-1 in the 52nd when he started a move down the right flank and then ran through the Leicester defence to apply a simple finish off Willian's low cross.

Barnes was carried off early in the second half with an apparent knee injury, and defender Jonny Evans was also hurt later in the game. Leicester was already without attacking midfielder James Maddison, who has a hip injury.

“It’s not good news, it looks like he needs to go for an operation so he will probably be a minimum of six weeks,” Leicester manager Brendan Rodgers said of Barnes' injury. “He has had niggles with it, which is why we rested him on Thursday (for a Europa League game), but unfortunately it’s a bad one for him and a huge blow for us."