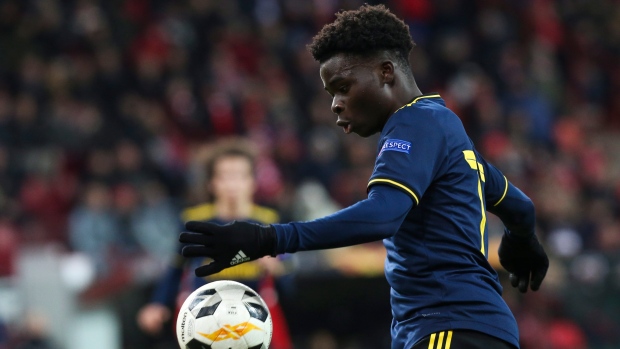 Teenager Bukayo Saka scored one goal and set up another to secure a 2-2 draw for Arsenal at Standard Liege on Thursday and lead the Gunners into the next stage of the Europa League.

The result meant Arsenal finished top of Group F ahead of Eintracht Frankfurt, which gave up a late lead to lose 3-2 at home to Vitoria.

Malmo, Copenhagen, Getafe and Cluj also qualified for the knockout rounds in Europe's second-tier competition on the final night of group-stage matches. Another five spots in the round of 32 were still up for grabs in the remaining matches later Thursday.

Malmo won Group B with with a 1-0 away victory at Copenhagen, which still joined the Swedish side in the next round.

Getafe needed at least a draw from the last game against Krasnodar to advance from Group C and cruised to a 3-0 victory. Cluj advanced from Group E thanks to a 2-0 victory over group winner Celtic.

Manchester United and Sevilla were among 13 teams to have already clinched a spot in the round of 32. The eight third-place finishes in the Champions League — including Ajax, Benfica and Inter Milan — will also enter the competition at that stage.

The draw for the round of 32 is scheduled for Monday.

Five-time champion Sevilla failed to maintain its perfect record after losing the last game 1-0 to APOEL in Group A.

Arsenal coach Freddie Ljungberg made nine changes to his lineup from a 3-1 win at at West Ham United on Monday in the Premier League. That victory ended a nine-match winless streak, the club's worst run for 42 years.

After struggling in the first half, Arsenal was 1-0 down two minutes into the second half. Samuel Bastien's shot from outside the area was deflected off defender Sokratis Papastathopoulos to beat goalkeeper Emiliano Martinez.

Selim Amallah doubled the lead for the hosts in the 69th with another deflected shot as Arsenal looked vulnerable at the back and lacked creativity in the middle.

But the second goal served as a wake-up call for Arsenal with Saka leading the rally.

The forward produced a perfect cross for Alexandre Lacazette in the 78th to head in from close range before curling in a shot from the edge of the area three minutes later.

Arsenal won the group with 11 points, two more than Frankfurt.

Italian club Lazio had to beat Rennes and hope Celtic defeated Cluj to have a chance of advancing, but the opposite scenario unfolded. Lazio lost 2-0 after Joris Gnagnon scored twice for Rennes, giving the French team its first win of the campaign.