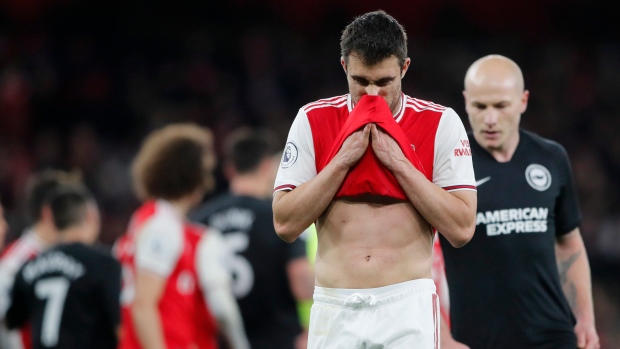 LONDON — Not since 1977 have things been this bad at Arsenal.

The struggling Gunners slumped to a 2-1 home loss to Brighton in the Premier League on Thursday, taking the team's winless streak to nine games in all competitions — its worst run in 42 years.

Interim coach Freddie Ljungberg clearly hasn't found a quick fix to all the problems that plagued the team under Unai Emery — who was fired last week — and the Gunners looked completely shorn of confidence against a Brighton side that dominated large parts of the game.

“I don't know what to say. I have the feeling that whatever we do it doesn't come out right,” Arsenal right back Hector Bellerin said. “I am lost for words a little bit.”

The team hasn't won in 60 days and allowed Brighton to outplay it for most of the first half.

Adam Webster put the visitors ahead in the 36th after Arsenal failed to clear the ball inside the box, giving Graham Potter's side a deserved halftime lead.

“We didn't show up in the first half, didn't work hard and want to play. You can't start like that,” Ljungberg said. “At halftime we said 'This is not Arsenal, we have to give it a crack.'”

That halftime talk seemed to have worked as Arsenal came out with a renewed sense of urgency, and Alexandre Lacazette equalized with a looping header five minutes after the break.

Arsenal kept pushing forward and had spells of pressure, but instead it was Neal Maupay who headed home the winner at the other end in the 80th minute.

The loss leaves Arsenal mired in 10th place after 15 games, 10 points outside the top four.

In Thursday's other game, Newcastle was helped by yet another disputed VAR decision as it ended Sheffield United's seven-match unbeaten run in the Premier League with a 2-0 victory.

Newcastle took the lead through Allan Saint-Maximin's header in the 15th minute, before Jonjo Shelvey netted a bizarre second midway through the second half.

United's defenders switched off completely after the linesman flagged for offside when Andy Carroll flicked the ball on toward Shelvey. However, the referee waved play on and the midfielder slotted the ball into the net when he was clear through on goal, with goalkeeper Dean Henderson making little effort to stop it.

A video review showed that Carroll was onside, and the goal stood.

It was the hosts' first defeat since losing at home to Liverpool in September.

The win brings Newcastle level with Sheffield and Arsenal on 19 points in midtable.